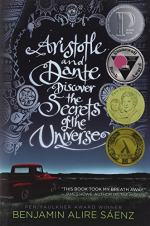 Aristotle and Dante Discover the Secrets of the Universe Symbols & Objects

Benjamin Alire Saenz
This Study Guide consists of approximately 49 pages of chapter summaries, quotes, character analysis, themes, and more - everything you need to sharpen your knowledge of Aristotle and Dante Discover the Secrets of the Universe.

Throughout the narrative, birds in general (and sparrows in particular) appear as symbols of vulnerability. Wounded and/or damaged birds are external representations of the wounded-ness and/or damaged-ness of various characters, but most particularly Ari and Dante.

Rain appears throughout the narrative, most often in connection to Ari's emotions. Two of its most vividly portrayed appearances are in relation to two seemingly different events. The incident in which Ari pushes Dante out of the way of an oncoming car but which breaks his (Ari's) legs is triggered, in part, by rain-slicked streets, appears destructive; the sequence near the end of the novel, in which a storm leads Ari to thoughts of kisses and imagining kissing Dante, appears softer and more nurturing. Further reflection, however, reveals that both these incidents (and several others throughout the narrative) are ultimately associated with the same thing: Ari's love...

More summaries and resources for teaching or studying Aristotle and Dante Discover the Secrets of the Universe.

Aristotle and Dante Discover the Secrets of the Universe from BookRags. (c)2022 BookRags, Inc. All rights reserved.