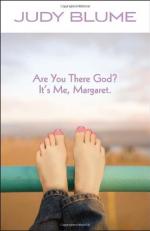 Are You There God? It's Me, Margaret Summary & Study Guide

Judy Blume
This Study Guide consists of approximately 32 pages of chapter summaries, quotes, character analysis, themes, and more - everything you need to sharpen your knowledge of Are You There God? It's Me, Margaret.

Are You There God? It's Me, Margaret Summary & Study Guide Description

Are You There God? It's Me, Margaret Summary & Study Guide includes comprehensive information and analysis to help you understand the book. This study guide contains the following sections:

This detailed literature summary also contains Topics for Discussion on Are You There God? It's Me, Margaret by Judy Blume.

Are You There God? It’s Me, Margaret is a young adult fiction book written by Judy Blume. First published in 1970, the book has faced censorship over the past four decades for its frank discussion of puberty and the pitfalls of organized religion. As a result, the book has found itself on numerous lists of banned books. Judy Blume maintains that the book is meant to encourage open discussions about sexuality, religion, and relationships between parents and kids.

Margaret Ann Simon is an eleven year old who is entering sixth grade. Though she has been raised with no organized religion, she talks to God on a regular basis. Her family moves from New York City to Farbrook, New Jersey, the week before Margaret begins school. Margaret’s first friend is Nancy Wheeler, another sixth grader who lives six houses away. Nancy immediately recruits Margaret to join her secret club that includes two other girls, Gretchen Potter and Janie Loomis. The club decides to call itself the Pre-Teen Sensations and makes rules about always meeting on Mondays, wearing bras and writing weekly entries in the “boy book” of crushes.

Margaret likes Farbrook but misses her grandmother, Sylvia Simon. Though Sylvia does not own a car or like to take public transportation, she finds ways to visit and spend time with her only grandchild. Margaret believes that part of the reason her parents moved to New Jersey is to get away from Sylvia and her influence on Margaret.

Margaret starts sixth grade at Delano Elementary School and her teacher is Mr. Miles J. Benedict Jr., a first-year teacher who is nervous around the kids. Margaret quickly becomes acquainted with the role of the students in her class: Philip Leroy, the cute guy; Norman Fishbein, the class drip; Freddy “Lobster” Barnett, the class bully; and Laura Danker, the tall, beautiful, developed girl who is the source of bad-reputation rumors. Mr. Benedict assigns the class a yearlong project to research any topic they would like, as long as it is meaningful to them. Margaret decides to do her project about finding a religion, since she has been raised without one and wants to decide if she should join the YMCA or the Jewish Community Center.

Over the course of the school year, Margaret attends Jewish temple with her grandmother and three different Christian churches. In each spot, Margaret has trouble finding God. She becomes increasingly frustrated in her search. When Margaret’s estranged grandparents pay a visit, her disdain for organized religion grows. Her grandparents, whom Margaret has never met before, are focused only on Margaret being a Christian and attending Sunday school. The rift the argument causes in Margaret’s family puts distaste in her mouth toward aligning herself with any religion, so she gives up her search. Despite ditching her efforts to join a religion, Margaret continues to talk to God on a personal level and confide in him the details, struggles, and triumphs of her life.

Margaret also deals with understanding her pre-teen sexuality and individual voice in the book. Like her friends, Margaret is desperate to start her period and develop breasts. She musters up the courage to ask her mother for a bra and even purchases sanitary pads for herself at the drugstore without shame. Margaret learns a valuable lesson about forming her own opinions about people when rumors about Laura Danker that Margaret believes turn out to be lies. The relationship that Margaret has with Nancy Wheeler is reassessed when Margaret discovers Nancy has been deceitful about being the second in the group to start her period.

By the end of the school year, Margaret has emerged a more confident, self-assured twelve-year-old with excitement about starting junior high school. In the final pages of the book, Margaret gets her period. First she tells her mother. Then she goes to God with the good news, saying that she knows he was there because he wouldn’t have missed it.

More summaries and resources for teaching or studying Are You There God? It's Me, Margaret.

Are You There God? It's Me, Margaret from BookRags. (c)2022 BookRags, Inc. All rights reserved.