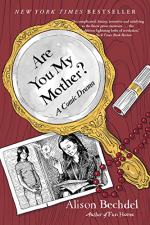 Are You My Mother? Summary & Study Guide

Are You My Mother? Summary & Study Guide Description

Are You My Mother? Summary & Study Guide includes comprehensive information and analysis to help you understand the book. This study guide contains the following sections:

This detailed literature summary also contains Topics for Discussion on Are You My Mother? by Alison Bechdel.

The nonfiction graphic novel, Are You My Mother, by Alison Bechdel, is a work of experimental nonfiction, which utilizes the vehicle of the graphic novel to tell the story. In many ways, it is a memoir of the author's relationship with her mother.

Each chapter opens with a dream sequence. The first dream the reader experiences is Bechdel trying to cross a body of water, but she is struggling to get across. Then, later, as she is rehearsing how she will break the news to her mother that she is writing a book about their lives, she nearly misses being hit by a bread truck; a bread truck from the same company who killed her father years before (when he committed suicide).

Later, Bechdel has the conversation with her mother and her mother is less than thrilled. It is evident that her mother has some sort of professional jealousy toward her daughter and is not supportive of her creative endeavors. Bechdel references Virginia Woolf who kept a journal just as Bechdel and Helen do. She also discusses a noted psychoanalyst, named Donald Woods Winnicott. Woof's poem, "To the Lighthouse" Bechdel notes, was written so that the poet might purge herself of her mother's influence. It is clear that Bechdel would love to do that for herself, but she doesn't know how.

Another dream involves Bechdel's then girlfriend, Amy. They find a quilt that has a dew-covered spiderweb on it. There are eleven sections, and they debate about the logic of the spider web's architecture. Later, in therapy sessions, Bechdel tells her therapist that she and Amy had a fight and had decided to take a tour of a church just to avoid talking about their problems. It is clear that Bechdel is very dedicated, nearly obsessed really, with therapy and her therapist.

The reader learns that Bechdel's mother used to be an actress but gave it up to become a wife and a mother. It is also clear that Bechdel's mother has resented her children ever since, for ruining her career. Bechdel does not verbalize her problems or her emotions and as a result, her therapist suggests, is having difficulty in relating to other people, or in maintaining a job. In essence, she is not being true to who she really is.

In some respects that is so, but in other respects, the author argues, it is not. Against her mother's wishes, and to her horror, Bechdel had declared that she was gay and came out. Her own father had hidden his homosexual tendencies and eventually had killed himself rather than live a lie any longer.

Another dream sequence features the prominence of holes. Holes in walls, ceilings, clothing, tiles, just about everything and anything. Alison also recalls that in the dream, any hole that belonged to her brothers were fixed immediately, but her holes were left unmended and unpatched. She quotes some reading that she's been doing in regards to Winnicott. He states that the false self hiding the true self leads to the conflict that most people feel in their lives, that feeling of dissatisfaction, of restlessness.

The reader learns that Bechdel's newest therapist, Jocelyn, is a type of mother figure to Bechdel. Jocelyn is trying to get Bechdel to stop trying to change her own mother, and to, instead, nurture herself in a way her mother never could.

There is another dream sequence, and in this dream someone is making a frantic phone call to the police. Someone has died, but since she is in her dorm room, her roommates don't seem to care. When Bechdel mentions this dream to her therapist, they deduce that this was a memory from when her father died and her mother had called the police. Later, however, when talking to her mother about the dream, her mother tells her that it was she who had been calling, trying to get Bechdel on the phone at school. She'd called to tell her that she and Bechdel's father were getting a divorce. But, he'd died before it had become known.

Bechdel is shocked when her mother gives her a box full of old love letters that her father had written her mother during their early days. She is hopeful that this has turned a page on their relationship, but later has that hope snuffed out when her mother lashes out at her for finishing the work. Bechdel begins to view her mother, not as a family member, but as a person. For the first time, she feels pity for her mother, whose dreams were never realized, and whose talents were never recognized.

Bechdel dreams of mirrors. Her mother is there, too, in a period costume. Later, Bechdel shares this dream with her therapist who suggests that mirrors are a way in which children begin to see who they really are. In many respects, initially, parents are the mirror. Bechdel realizes that she's rejecting that initial image that she was shown, that of her own mother, because despite her yearning to connect with her mother, they just aren't able. Bechdel experiences an epiphany about her mother and their relationship and understands that her mother was just a very frustrated person trying to do the best with the situation she was given.

The last dream sequence has Bechdel finding a pimple on her face, as she is viewing herself in a mirror. As she picks at it, she removes it from her face and is horrified to see that it is a tumor. She tells her mother, but her mother won't talk to her. She analyzes the dream herself, determining that her mother is the one that is holding her back from her own happiness and success.

With this understanding, Bechdel begins to view her mother through a slightly different lens. She understands that if she can 'destroy' her mother, or the image that she has of who her mother should be, and her mother survives this reimaging process, then they will be better with one another. When the book is complete, Bechdel feels that she has done this and that their shared history no longer holds any influence over her. They are merely two grown women who have the same genetic makeup, and once in a while, enjoy a Broadway show together.

Are You My Mother? from BookRags. (c)2022 BookRags, Inc. All rights reserved.