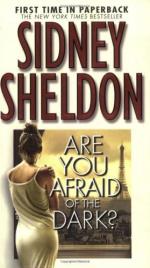 Are You Afraid of the Dark? Summary & Study Guide

Sidney Sheldon
This Study Guide consists of approximately 56 pages of chapter summaries, quotes, character analysis, themes, and more - everything you need to sharpen your knowledge of Are You Afraid of the Dark?.

Are You Afraid of the Dark? Summary & Study Guide Description

Are You Afraid of the Dark? Summary & Study Guide includes comprehensive information and analysis to help you understand the book. This study guide contains the following sections:

This detailed literature summary also contains Topics for Discussion and a Free Quiz on Are You Afraid of the Dark? by Sidney Sheldon.

Are You Afraid of the Dark? is an action-filled thriller which takes the reader on a tour of the playgrounds of the rich and famous. Tanner Kingsley takes white-collar crime to new heights by using his billion-dollar think tank corporation to create a machine for himself, which can control the weather. Prima is actually the brainchild of Tanner's older brother, Andrew Kingsley, who heads up the Kingsley Group think tank. Andrew initially creates Prima in the hopes of addressing the environmental problem of global warming.

Andrew's brother, Tanner, is not as concerned with solving the world's problems as his older brother. Instead, Tanner dreams of turning the philanthropic Kingsley Group into a supercharged think tank devoted to earning profit and power. He is a megalomaniac of the highest order, who intends to hold the world hostage once he has perfected the Prima project. First, he needs to get his brother Andrew out of the way. Tanner secretly sabotages a dangerous experiment with which Andrew is involved and Andrew's resulting exposure to toxic gases leaves him severely brain-damaged. Now Tanner is free to explore his power-hungry goals as the sole head of the think tank, which he renames Kingsley International Group, or KIG.

Unfortunately for Tanner, four of the scientists under his employ at KIG manage to figure out what Prima can do, despite his best efforts to keep them in the dark. When the scientists learn that Tanner does not intend to give Prima to the government, they realize that he intends to use it for more sinister purposes. The scientists plan a rendezvous in Washington, D.C. where they intend to reveal Prima's existence and purpose to Senator Van Luven, a member of the Senate Select Committee on the Environment. Before they can meet with the senator, all four men are killed. Tanner doesn't stop there; he goes after the men's families as well, just in case the scientists talked to their loved ones about Prima.

Sonja Verbrugge is killed in Berlin, Germany. Her husband had worked for KIG Berlin and was one of the four men scheduled to meet with Senator Van Luven in Washington. Lois Reynolds is attacked in Denver, Colorado, just a few miles from where her brother Gary's airplane mysteriously crashes. The other two scientists killed by Tanner are Richard Stevens and Mark Harris. Their unsuspecting wives, Diane and Kelly, are about to become Tanner's next targets.

Both women have barely recovered from the initial shock of the news of their husbands' deaths when Tanner goes after them. The unsuspecting women should make easy targets for the practiced assassins who Tanner hires. However, time after time, the assassins miss their targets. With a combination of ingenuity and luck, the women escape several death traps and together resolve to learn the secret that got their husbands killed.

Diane Stevens and Kelly Harris are unlikely heroines for an action thriller. Diane is a sensitive artist and Kelly is a glamorous supermodel. The women may be inexperienced investigators, but with their beloved husbands' deaths as motivation, they quickly pick up Tanner's trail. Kelly and Diane learn about the other related deaths and escape the country to visit the scenes of the crimes. They travel to Berlin, Germany, where Sonja Verbrugge was killed and Paris, France, where Kelly's husband Mark met his untimely death. They are hampered at every turn by Tanner's thugs, Greg Holliday, Vince Carballo and the exceedingly bloodthirsty Harry Flint.

Unable to learn anything in Europe, the two heroines return to the United States, where they visit the site of Gary Reynolds's plane "accident." They discover that Gary's sister Lois is still alive after escaping a firebomb and from Lois the ladies finally learn about the existence of Prima. Intending to finish what their husbands started, the two women make an appointment with Senator Van Luven. They plan to disclose to her the details about the Prima project.

Unfortunately, the women don't realize they are walking into the same trap Tanner had so effectively set for their spouses. Senator Van Luven turns out to be Tanner's co-conspirator and his girlfriend. In a showdown at the senator's home, Tanner sets his goon, Harry Flint, on the trapped women. Kelly and Diane manage to elude Flint's clutches and the women go straight to the press with details about Prima. This forces Tanner to destroy his prized weather machine, but he has one more surprise in store for Kelly and Diane. He has secretly built a second Prima in the French Polynesian islands.

Tanner and Senator Van Luven escape on Tanner's private jet, leaving Prima I set to self-destruct. They intend to hold the world hostage with the power of Prima II. Tanner makes the critical mistake of underestimating his brain-damaged brother Andrew, however. Tanner leaves Andrew behind to die in the Prima explosion. Andrew, even with his mental disability, realizes his brother has become an evil man. As his final act, Andrew sets Prima to destroy the KIG jet with Tanner and Van Luven inside. With Tanner Kingsley dead, his vast conspiracy collapses. Kelly and Diane have survived their ordeal and set about reclaiming the pieces of their lives.

More summaries and resources for teaching or studying Are You Afraid of the Dark?.

Are You Afraid of the Dark? from BookRags. (c)2022 BookRags, Inc. All rights reserved.