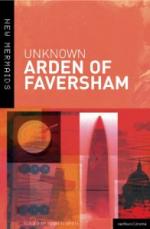 Introduction & Overview of Arden of Faversham

Anonymous
This Study Guide consists of approximately 42 pages of chapter summaries, quotes, character analysis, themes, and more - everything you need to sharpen your knowledge of Arden of Faversham.

This detailed literature summary also contains Bibliography on Arden of Faversham by Anonymous.

The Tragedy of Master Arden of Faversham was first published in London in 1592, although it may have been written and performed several years earlier than that. The play appeared during the golden age of English drama that occurred toward the end of the Elizabethan Age, which refers to the reign of Elizabeth I, from 1558 to 1603.

Arden of Faversham was published anonymously, and as of the early 2000s, the author remains unknown. It is possible that it was written by one of the three leading dramatists of the day: Thomas Kyd, Christopher Marlowe, or William Shakespeare. The play appears to have been popular during its time, being reprinted in 1599 and again in 1633, and it has been revived on many occasions in modern times.

The play, which is classified as a domestic tragedy, is based on a sensational crime that took place in the small town of Faversham in the county of Kent, England, in 1551. The most prominent Faversham citizen, the wealthy landowner Thomas Arden, was murdered by two men hired by Arden's wife, Alice, who wanted to get rid of her husband because she was having an affair with a man named Mosby.

In this chapter, all quotations are from the edition of Arden of Faversham edited by M. L. Wine, in the Revels Plays series published by Methuen. In some sources, the name Faversham is spelled Feversham.

More summaries and resources for teaching or studying Arden of Faversham.