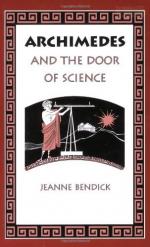 Historians know that Archimedes author two papers concerning arithmetic but one is lost. He had written it on the principles of counting or numeration. The Greeks had just derived a system of numeration and it was clumsy. Many believe that Archimedes and Apollonius used a decimal system.

His other paper, The Sand Reckoner, has been preserved. In the paper, Archimedes said that there were unimaginably large numbers and that anything could be measured with them with numbers to spare. There were an infinite number of numbers. He started his argument with the largest number in Greek - the myriad or 10,000. He multiplied it by itself and then continued from there, arguing at each step that the result was still a number.

Archimedes then generated the 'cattle problem' for his friends to show them how large...

(read more from the Chapter 9, Archimedes and Numbers Summary)

Archimedes and the Door of Science from BookRags. (c)2021 BookRags, Inc. All rights reserved.