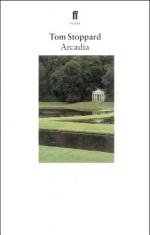 Tom Stoppard
This Study Guide consists of approximately 35 pages of chapter summaries, quotes, character analysis, themes, and more - everything you need to sharpen your knowledge of Arcadia.

Arcadia tells the story of the lives of the Coverly family of Sidley Park, Derbyshire, England, in the years 1809-1812. Simultaneously, it also tells the story of the present day Coverly family of Sidley Park. The narrative also details the lives of the past and present guests and staff who reside at Sidley Park. The narrative of Arcadia involves a multiplicity of personal, philosophical, and scientific themes as the characters of the play attempt to develop and discover a world of order and sense in the chaos of history and the present world. While presenting the romantic sagas of the characters, which resemble a modern day soap opera, the play also examines the principles of mathematics, literary analysis, historical research, and garden landscape.

The Coverlys both past and present are an eccentric group of philosophers, scientists, and mathematicians. One of the main themes of the play is the clash between Enlightenment and Romanticism. The eighteenth century age of Enlightenment stressed order, logic, and rationality. The aesthetics and social structures of Classical Greek and Roman societies were held up as models of perfection for their moderation and emphasis on the mind. Great figures of the Enlightenment were characterized by restrained emotion in all areas of their lives from culture to art. Romanticism, on the other hand, was a movement of the early nineteenth century and was created as a direct reaction to the order and restraint of the Enlightenment. Advocates of Romanticism stressed the importance of nature and emotion. Order and restraint were viewed as tools of oppression. The artistic creations of the individual and the emotions of the individual became the most important cornerstones of society. The transformation of the Sidley Park gardens from the pastoral perfection of Enlightenment culture to the fantastical Gothic wilderness of Romantic culture symbolizes the tension between Classical and Romantic thought that is an underlying theme of the entire play.

Flowing out of this clash between Enlightenment and Romantic thoughts and philosophies is the clash between the characters which embody these two schools of thought. Bernard Nightingale and Hannah Jarvis argue over the techniques of literary analysis and historical research. Bernard advocates intuition and imagination and Hannah advocates concrete proofs grounded in reality. However, both ultimately discover the theory that forms the basis of their research and discoveries is a mistake. Through the character of Thomasina Coverly, mathematical theories and formulas are applied to the natural world and a formula for the future of the universe is discovered but lost due to her untimely death. A Coverly descendent, Valentine, is able to develop Thomasina’s formula using modern technology, but even modern technology cannot ultimately discover the answers of the universe. Neither school of thought is ultimately justified. The representatives of the Enlightenment realize their intellectual pursuits can only take them so far and the representatives of Romanticism realize emotion can lead to mistakes. The essence of life lies somewhere between the philosophies of the Enlightenment and Romanticism. The essence of life is the heat of passion whether it is the passion of intellectual pursuit or emotional passion for another human being.

Although the play depicts the clash between these two schools of thought and examines the concepts of nature, math, literature, and art, there is never a final resolution or a final discovery. The characters of the past look to the future for the answers to their questions and the characters of the present look to the ideas of the past. Neither group is able to uncover finally the answers to their questions, suggesting there is no ultimate answer. Life is too short and chaotic for any one person ever to arrive at the ultimate answer. Life is too riddled with the distractions of emotion and human interaction for a complete scientific or philosophical survey to be completed. The most important thing is the process of investigation and thought, not the destination. And the only waypeople are remembered is by creating questions that will continue to puzzle future generations. Creation of art and literature, scientific queries and formulas, these are the things that last. The elements of culture are forgotten and dropped only to be rediscovered by future generations. The flow of time is cyclical and all events, memories, creations, philosophies and discoveries will be forgotten and remembered over and over again. In the end, the play concludes, the process of thought is far more important than the destination of the thought process. It is the search for meaning and knowledge, the desire to discover, that gives life meaning. The world is a chaotic swirl of cyclical repetitions of people, events, and discoveries and the only thing that pauses time and has meaning is the desire to know.

More summaries and resources for teaching or studying Arcadia.