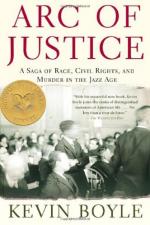 Arc of Justice: A Saga of Race, Civil Rights, and Murder in the Jazz Age Setting & Symbolism

Kevin Boyle
This Study Guide consists of approximately 45 pages of chapter summaries, quotes, character analysis, themes, and more - everything you need to sharpen your knowledge of Arc of Justice.

Detroit is the city where the book opens, as the black Sweet family moves into an all-white neighborhood. African-Americans in 1925 Detroit face racial discrimination, as they do in other locations throughout the country. Racial tensions are high when Sweet and Gladys move into the house on Garland Avenue due to other incidents in previous weeks regarding blacks who moved into white neighborhoods.

Detroit is a stronghold of the Ku Klux Klan which has lost a local election due to the misspellings of the name of their write-in candidate. Many of the police are Klan members. They are looking for a cause to rally behind when the Sweet incident occurs. The mayor adds fuel to the fire by calling the Sweets and other blacks who move into all white neighborhoods the tools of the Klan.

Detroit, like other cities, has color lines that try to confine the blacks...

More summaries and resources for teaching or studying Arc of Justice: A Saga of Race, Civil Rights, and Murder in the Jazz Age.

Arc of Justice: A Saga of Race, Civil Rights, and Murder in the Jazz Age from BookRags. (c)2022 BookRags, Inc. All rights reserved.