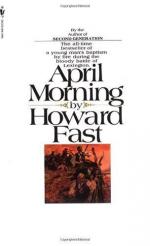 This Study Guide consists of approximately 26 pages of chapter summaries, quotes, character analysis, themes, and more - everything you need to sharpen your knowledge of April Morning.

This detailed literature summary also contains Quotes and a Free Quiz on April Morning by .

“April Morning” is a young adult historical novel by Howard Fast occurring in the very early days of the American Revolution April of 1775. Adam Cooper is a 15-year-old resident of Lexington, Massachusetts, where he lives with his father, mother, grandmother, and younger brother, Levi. The residents of Massachusetts are angry against British rule, for the British are taking away the rights of the colonists one by one. Each town across the colony has drawn up a charter of rights, extolling the idea that rights come from God, and not from King George III. Adam himself has a difficult relationship with his father, who has high expectations of Adam that Adam never seems to fulfill.

The locals in Lexington determine how best to handle the situation should violence break out. It is agreed that a militia should continue to be kept in the event that the British become violent, but few suspect that the British will turn against their own colonial subjects. War seems a dream for most of the residents of Lexington. Among them are Adam and Ruth Simmons, a girl of fifteen who is in love with Adam. She longs to marry him and begin a family with him, and worries about the penchant for war with Great Britain.

When word comes that the British have moved out of Boston, Adam, his father, and the town’s militia assembles in the hopes that the British will leave them alone and pass on to their goal, Concord. Adam and his father make peace with one another as they head out to assemble. However, the British advance guard that arrives does not march past the militia.

Instead, they form battle lines and attack the militia, scattering them and moving on to Concord. Adam’s father is killed, and Adam meets up with other locals – men pouring in from every direction – to fight the British. Adam becomes part of a running battle between Concord and Boston, battling the British while women and children bring the colonials water, food, and other supplies. The British are eventually driven back into Boston, where thousands more militiamen converge to besiege the city.

At home later, Ruther is thrilled that Adam is still alive, and vows that she will wait for Adam in order to marry him, imagining that Adam will go off to fight again soon. Adam himself is torn about going off to fight, or remaining in Lexington. Ruth’s father encourages Adam to consider not leaving right away, insisting that his family will need him in the coming days now that his father is gone. Adam agrees. He then helps to tend to his family, and determines that, though he will eventually go off to fight, it will not be the next day. He reminds his grandmother that although she has lost her son, she still has Adam in her life. Nevertheless, she worries about Adam knowing that he will not stay out of the war forever. As he goes to sleep that night, Adam thanks God the day is over.

More summaries and resources for teaching or studying April Morning.