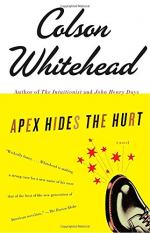 Colson Whitehead
This Study Guide consists of approximately 35 pages of chapter summaries, quotes, character analysis, themes, and more - everything you need to sharpen your knowledge of Apex Hides the Hurt.

This detailed literature summary also contains Quotes and a Free Quiz on Apex Hides the Hurt by Colson Whitehead.

The following version of this book was used to create this study guide: Whitehead, Colson. Apex Hides the Hurt. New York: Anchor Books, 2007.

The novel’s protagonist—whose name is never given—is a professional nomenclature consultant, meaning he is paid to think of good names for products. He is also African-American. He used to work for a large firm, but he recently quit his job after beginning to become disillusioned with the work. However, he is then hired by a town called Winthrop to help them think of a new name for the town. Winthrop is an old suburban town that has begun to undergo rapid economic growth due to the arrival of a large tech company, Aberdeen Software. The town council is comprised of Mayor Regina Goode, Aberdeen Software CEO Lucky Aberdeen, and Albert ‘Albie’ Winthrop, who is a descendant of the Winthrops after whom the town is named.

As the protagonist begins to meet with the town council members and research the town’s history, he learns various facts that are relevant to the town’s potential name change. Lucky wishes to rename the town New Prospera, as he sees that name as being more representative of his own vision of the town’s future. Albie Winthrop wishes for the town’s name to stay the same, as he views the town’s history as inextricable from his family’s history. The protagonist learns that the town was originally founded by African-Americans and was originally named Freedom. However, the industrialist Winthrop family eventually arrived and used their economic influence to essentially take over the town, rename it, and rewrite its history.

The protagonist meets with Mayor Regina Goode, who is African-American and is a descendant of Abraham Goode, one of the town’s original founders. Regina sees the necessity of economic growth, but she wishes to change the town’s name back to Freedom, as she dislikes the way in which economic changes often obfuscate elements of history. With the help of Beverley, the local librarian, the protagonist manages to find documents that tell the true history of the town.

The narrative occasionally digresses to give exposition on the protagonist’s backstory. He had no interest in being a nomenclature consultant, but he had an innate talent for it and therefore developed a passion for the work. However, around the time that he badly injured one of his toes, he began to become disillusioned about the work, viewing it as shallow. He covered his wounded toe with a brand of bandage, Apex, that he had helped name. Unseen, the wound eventually became infected, and the toe had to be removed. The protagonist quit his job soon after.

The protagonist continues his research into the town’s history, and he learns that one of the original founders, William Field, had proposed the name Struggle for the town’s original name. The town was instead named Freedom, as Abraham Goode had suggested. However, Goode eventually betrayed this name by voting to have the town name changed to Winthrop in order to curry the Winthrops’ favor and economic power. The protagonist, after contemplating his newfound appreciation for the power of names, history, and social struggles, decides to name the town Struggle.

More summaries and resources for teaching or studying Apex Hides the Hurt.