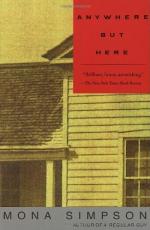 Mona Simpson
This Study Guide consists of approximately 39 pages of chapter summaries, quotes, character analysis, themes, and more - everything you need to sharpen your knowledge of Anywhere but Here.

This detailed literature summary also contains Topics for Discussion and a Free Quiz on Anywhere but Here by Mona Simpson.

Anywhere but Here is Mona Simpson's tale of Ann August, a young girl growing up with a narcissistic, manipulative, dramatic, irresponsible, twice-divorced mother named Adele. Ann is trapped in a complicated dance, craving affection and depending upon a mother who is emotionally abusive. The novel includes several scenes of subtle but disturbing sexual abuse of children. The novel is suffused with the adult Ann's affection for and tolerance of her mother's foibles, even though they make Ann's childhood difficult.

Beginning when Ann is just a toddler, her mother Adele dreams of making Ann a child star. Adele longs to escape Bay City Wisconsin for a wealthy, glamorous life in Hollywood, and sees Ann as her tool to do so. Adele persists in the belief that Ann will be a child star, even though the agents she consults are not encouraging. The story opens with seven-year-old Ann living with her doting, supportive grandmother and her manipulative, self-centered, controlling mother in the grandmother's modest home on Lime Kiln Road. Next door Ann's aunt Carol and her husband Jimmy live with their two sons, a noisy, contentious family completely unable to protect Ann from her mother's abuse.

When Ann is nine, the mother and daughter take ice skating lessons together. Adele meets Ted, the ice skating pro, and soon they are dating. Adele marries Ted and with Ann they move into a windowless ranch house. Ted and Adele live far beyond their means, buying expensive cars and fancy clothes but living in a house without any furniture. Ted begins to work more hours, and the couple drifts apart. Their financial problems drive another wedge between them, but the biggest factor in their break-up is Adele's delusions of grandeur and longing for a more glamorous life in California. Adele scams an elderly owner out of a Lincoln Continental, steals Ted's credit card and heads to California with Ann.

In California, Adele takes a job as a speech therapist with the Los Angeles school district. Instead of living within her means, she continues to mismanage her money. Adele rents a tiny furnished studio in Beverly Hills so that Ann can attend Beverly Hills High School with the children of wealthy producers and movie stars. Eventually the two move into a two-bedroom townhouse, but again they cannot afford furniture. When Adele loses her job, she works as a housekeeper for the parents of Ann's friend Peter Keller, living in the Kellers' guesthouse. Mrs. Keller fires Adele, but she and Ann continue to rent the Kellers' guesthouse throughout Ann's high school years. Adele has a series of relationships with men in her unsuccessful quest to find a rich husband.

Finally when Ann is 17, she goes on her first audition and wins a minor role in a TV series. The job lasts only for one year, but it is enough to get Ann into a good college and pay for her education. Once she has escaped her mother's control, Ann does not return for five years. Instead, she spends holidays and vacations with her grandmother and extended family in Wisconsin. Still, when Ann receives a large residual check, she gives it to her mother to buy a little retirement cottage. Instead, Adele spends the money on a luxury car and continues her irresponsible lifestyle, renting a house on the beach from the Kellers. Despite her unbalanced mother and chaotic childhood, Ann is able to make a successful life for herself.

More summaries and resources for teaching or studying Anywhere but Here.