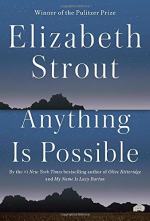 Anything Is Possible Symbols & Objects

Elizabeth Strout
This Study Guide consists of approximately 82 pages of chapter summaries, quotes, character analysis, themes, and more - everything you need to sharpen your knowledge of Anything Is Possible.

The Windmills in "Windmills"

The windmills symbolize our inability to identify with the pain and suffering of others, no matter how similar it is to our own. As Patty watches the windmills, she is drawn to them, much the same way she is drawn to Lucy Barton's book and memoir. The windmills, each move at the same constant pace, but their arms are not synchronized. Instead, they move both separately and together. Occasionally, two will synchronize, however. Those moments of synchronicity mirror the moments when characters in the text are able to move with one another through their individual pain rather than suffering separately.

The Dairy Farm in "The Sign" symbolizes the past as an ideal rather than a reality. For the elderly Tommy Guptill at the beginning of "The Sign," the dairy farm is already a fixture of the past...

More summaries and resources for teaching or studying Anything Is Possible.

Anything Is Possible from BookRags. (c)2022 BookRags, Inc. All rights reserved.