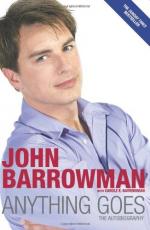 Anything Goes Summary & Study Guide includes comprehensive information and analysis to help you understand the book. This study guide contains the following sections:

This detailed literature summary also contains Topics for Discussion on Anything Goes by John Barrowman.

Anything Goes is the 2008 autobiography of actor, singer, and television personality John Barrowman. At the publication of the book, Barrowman was perhaps best known to fans for his starring role of Captain Jack on the BBC television series Torchwood. Barrowman originated the role of Captain Jack on the iconic, long-running science fiction series Doctor Who.

John Barrowman was born in 1967 in Scotland. He was brash and a risk-taker as a "wee lad" and would often get himself into mischief. He had two older siblings: Andrew and Carole (the latter of whom co-wrote this autobiography). John Barrowman first discovered his love of an audience by performing songs and skits in front of family at numerous parties and engagements.

When Barrowman was nine, his father was transferred to Illinois in the United States. Children made fun of Barrowman's Scottish accent, so he learned how to move effortlessly between an American and a Scottish accent. In high school, Barrowman played the flute but was discovered to have a good voice when he was singing a part he was trying to learn for the flute. He joined the choir, the Forensic Competition for spoken word art, and was soon participating in school plays and musicals.

After a false start at the University of Iowa, where Barrowman rejected teachers' attempts to turn him into an opera singer, Barrowman attended the University of San Diego. He was soon earning the male romantic lead in the drama department's various musical productions. His good looks and strong singing voice made him a natural for such parts, and he continued to improve his dancing, which he considered his weakest feature. Around this time, Barrowman also fully discovered his homosexuality.

On a vacation back to Scotland to see relatives, Barrowman heard of a casting call for the West End production of Cole Porter's Anything Goes. Barrowman attended and impressed the producers, who cast him after a follow-up. This professional debut occurred in 1989 when Barrowman was 22.

During the 1990s, Barrowman participated in many professional stage productions on London's famed West End, becoming a quintessential leading man. He also became a television presenter on BBC kids shows. He starred in two canceled American TV pilots, and he was the star of an infamous cult horror film called Shark Attack 3: Megalodon. Attributing constant risk-taking to his success, Barrowman played parts in Shakespeare plays as well as in musicals by Stephen Sondheim and Andrew Lloyd Webber. Well-known musical producer Cameron Mackintosh had a profound impact on his career.

In the 2000s, Barrowman continued to act in stage plays. He started an annual cabaret with his high school drama teacher. And he landed the role of Captain Jack in the science fiction series Doctor Who. He later got his own series in Torchwood.

Anything Goes from BookRags. (c)2022 BookRags, Inc. All rights reserved.