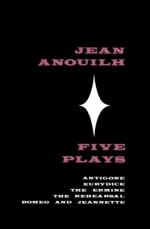 Traces the development of theatricalism in French theater.

A comprehensive study of Anouilh's life and work, with analysis of the major plays.

A study of the theatricalism of Anouilh's plays, with discussions of his staging and characterization.

Analyzes the theme of rebellion in Anouilh's works.