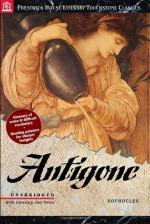 Sophocles
This Study Guide consists of approximately 26 pages of chapter summaries, quotes, character analysis, themes, and more - everything you need to sharpen your knowledge of Antigone.

This city/state was one of the dominant military/political forces in Ancient Greece and is the setting for the play’s action.

As the result of his having (unknowingly) killing his father and marrying his mother, Oedipus caused a curse to be placed on his descendants, resulting in their living unhappy lives and dying violent deaths. His four children – Antigone, Ismene, Eteocles and Polyneices – all, as revealed here, fell victim to that curse.

The action of the play takes place in the courtyard of the main palace of Thebes, the home of the royal family. This setting, a courtyard and central square with a large, imposing building as a main backdrop, was a common one in Classical Greek theatre.

In Classical Greek religious tradition and practice, ceremonies marking the burial of the dead included the pouring out of libations to...