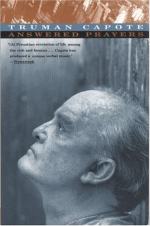 Truman Capote
This Study Guide consists of approximately 35 pages of chapter summaries, quotes, character analysis, themes, and more - everything you need to sharpen your knowledge of Answered Prayers.

This detailed literature summary also contains Topics for Discussion and a Free Quiz on Answered Prayers: The Unfinished Novel by Truman Capote.

The three short works in this book are chapters of an uncompleted novel by acclaimed writer Truman Capote. Narrated by what an editor's note suggests is a thinly veiled version of the author himself, the chapters and stories focus on the lives and experiences of individuals, both real-life and fictionalized, that are active in the so-called "high society" of the time. At the core of both the book's narrative and thematic considerations is the experience of loneliness, as well as two of its primary manifestations, which are the exploitation of others and the allure of fame and fortune.

The book opens with an introductory note from its editor who describes the developmental and inspirational circumstances of what Capote originally intended to be a new novel. He comments on how the publication of the author's phenomenally successful book "In Cold Blood" combined with his very active social life and increasing substance addiction make writing the book difficult. Fox also describes how the three chapters included in this publication were each published separately in magazines, how the reaction of Capote's friends was violently negative, how those friends completely rejected him, and how the author suffered a crisis of confidence as a result. Finally, Fox comments on how the author repeatedly indicated to him that he was at work on more of the book, and then outlines his theories as to why the manuscript was never completed.

The first chapter, the longest of the three and the one most clearly anchored in an overall story, is entitled "Unspoiled Monsters." The narrator, writer P.B. Jones, introduces himself, sketches in his history, describes his ambition to be a well-known and published writer, and details the relationships and circumstances into which he entered in order to realize that ambition. The narrative juxtaposes the seediness of Jones' current living situation as a male prostitute making his "home" in the squalid atmosphere of the New York City YMCA with the glittering high life of being sophisticated, wealthy, and leisurely to which he aspires. Names of real-life famous people are placed next to fictionalized versions of their peers, creating a sense of barely disguised reality. Names have been changed to protect to both the guilty and the innocent.

The book's second section is entitled "Kate McCloud," and focuses on the beginnings of the narrator's relationship with vulnerable and indulgent socialite Kate McCloud. The character's background is outlined in detail in the later pages of "Unspoiled Monsters," and her origins as the ambitious daughter of a poor family, her marriage into wealth and social status, her discovery that that marriage was a sham, her departure from it and her entry into a second, which turned out to be both a sham and dangerous. In "Kate McCloud," the narrator describes being introduced to her, his immediate attraction to her, and rapidly being hired to work in her entourage. Throughout this section, he hints in narration at potentially dangerous experiences he shared with Kate but the material published here never explicitly defines what those experiences were.

The final section of the book is both titled and set in "La Côte Basque," a high-end restaurant in New York City where socialites went to both eat and to be seen by other socialites. There, the narrator has lunch with Lady Ina Coolbirth who gossips about friends and diners at the restaurant and tells a pair of lengthy stories. The first is about Ann Hopkins who has gotten away with the murder of her husband. The second is about the ambitious gigolo Sidney Dillon who was taught a humiliating lesson by the socially and politically important wife of a prominent politician. Eventually, the vulnerable Lady Ina reveals that her husband is planning to divorce her, wonders what will become of her, and compares her lot to that of another socialite who became a lesbian after her husband divorced her and lived happily with a new partner.

The narrative concludes with a brief and poetic description of fading beauty and the passage of time.

More summaries and resources for teaching or studying Answered Prayers: The Unfinished Novel.