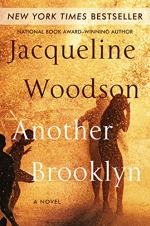 Another Brooklyn Summary & Study Guide includes comprehensive information and analysis to help you understand the book. This study guide contains the following sections:

This detailed literature summary also contains Quotes and a Free Quiz on Another Brooklyn by Jacqueline Woodson.

The following version of this book was used to create this study guide: Woodson, Jacqueline. Another Brooklyn. Harper Collins, 2016.

Twenty years after the events that defined her childhood, August returned to Brooklyn to bury her father. The novel opens with her having a meal with her younger brother, who is a follower of the Nation of Islam. As they ate, he encouraged her to turn back to faith as she savored the bacon on her plate. On the subway ride back to clean her father's apartment, August saw Sylvia, a woman she was close friends with as a child. The unexpected meeting threw her into a panic, and she left the train long before her stop. Seeing Sylvia again brought up memories of her girlhood, and the narrative then flashes back to the summer of 1973, when August was eight and her mother started hearing voices.

August spent her youngest years on family land called SweetGrove, in Tennessee. Following the death of her brother Clyde in Vietnam, August's mother began hearing his voice and sleeping with a butcher knife. August's father eventually moved himself and the two children to Brooklyn, New York, where he grew up. Ten-year-old August and her six-year-old brother spent their days believing that their mother would come for them. They spent that summer watching the streets of their Brooklyn Neighborhood from the closed window of their third-floor apartment. As they watched life go on outside their window, August saw three girls: Sylvia, Gigi, and Angela. It was during this time that her father was approached by someone from the Nation of Islam. Their summer of solitude continued, until August's younger brother pushed his hands through the window in an effort to open it or escape.

After they are permitted to go outside, August wandered the streets looking for and thinking of her mother. She and her brother still believed that she would come for them, and tried to find her on their daily walks. When they returned to school, August was welcomed into the group of girls she saw from the window. Sylvia, a beauty with reddish brown hair who reads Hegel and Marcel in French, arrived from Martinique a year before. Gigi, a multi-ethnic girl with a long, dark braids came to Brooklyn from South Carolina with her 21-year-old mother. Angela seems to have always lived in Brooklyn; she told them she has no history and refused to open up.

August recounted the summers her family spent at Coney Island and explained that at the time, they did not understand the type of poverty they lived in. It is only her reflection and memory that helps her to understand it. Her recollections, however, revealed that they lived in a changing neighborhood, with a woman who was most likely a prostitute downstairs, heroine addicts in the stairwells, and Vietnam veterans homeless on the streets. All the while, August believed that her mother was coming back for them.

Without her mother, August depended on the close friendship she forged with the three other girls. Together, they thought of their own mothers, dreamed of the future, and were a haven against the world outside and the sadness within themselves. When Gigi was molested by a homeless veteran in her building's stairway, the girls went together to buy razor blades and practice using them. As they grew closer, their differences emerged. Angela was tight-lipped about her mother and home life, even as she dreamed of being a dancer, but it became clear that Sylvia's family was well-off and her father did not approve of the other girls.

As the girls grew into teenagers and with the development of hips and breasts, Brooklyn became a more dangerous place. Boys at school and men in their lives began to take notice of their sexuality, even as the girls themselves clung to the last vestiges of their childhood. At this point, August began asking her father whose ashes are in the urn he keeps in their home.

The blackout of 1977 functions as a turning point in August's narrative. The white people in her neighborhood had almost all moved away, her brother no longer needed the fantasy of his mother returning for them, and her father began seeing other women. August still could not accept her mother's death, even as she dreamed of a new family with one of these women. Her father converted to Islam at this time. At home, August observed Muslim customs, but outside, she did not. At this time, Sylvia's father refused to allow her to see the other girls and August began dating a boy named Jerome.

By the time the girls are 13, the girls became more sexually aware, and August recognized the often tragic fates of women in her neighborhood. In December, a woman was found dead on the roof of a building in the projects, and they realized that it is the mother Angela had been hiding from them. The girls at first refused to believe the reality of Angela's life--where she lived, who her mother was--and August compared this to her own mother's refusal to believe in Clyde's death. Just as her mother began disappearing after Clyde's death, the girls' friendship started to fade after Angela's mother's death.

When August is 15, she refused to allow Jerome to have sex with her. Not long after, she saw him in the park with Sylvia. August began pulling away from the group, and three months later, August saw Sylvia again. Her friend was pregnant and would probably never accomplish all that her father had planned for her. By then, they were no longer close friends. August was buried in studying for college exams and planning on her own escape from Brooklyn. Gigi invited them all to her performance in Jesus Christ Superstar, but overwhelmed by the memories of the past, August could not make herself go. She learned later that none of the three friends went, and later that night at the cast party, Gigi jumped off the eleventh floor of the hotel.

The novel then flashes forward, to August (now Auggie) in college, sleeping with white boys and, later, women, traveling the world, and still sleeping with her hands in fists. In her first year at Brown, August saw Angela on TV and knew that at least one of them has made it out. The novel ends with a memory of revisiting Sweet Grove when she was 16. She, her father, and her brother walked out to the water's edge, where her mother drowned, and August saw that all of life is a long traveling home, where everything will eventually fade to memory.

Another Brooklyn from BookRags. (c)2022 BookRags, Inc. All rights reserved.