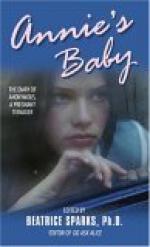 Anonymity
This Study Guide consists of approximately 33 pages of chapter summaries, quotes, character analysis, themes, and more - everything you need to sharpen your knowledge of Annie's Baby.

Annie's Baby: The Diary of Anonymous, a Pregnant Teenager Summary & Study Guide includes comprehensive information and analysis to help you understand the book. This study guide contains the following sections:

This detailed literature summary also contains Topics for Discussion and a Free Quiz on Annie's Baby: The Diary of Anonymous, a Pregnant Teenager by Anonymity.

"Annie's Baby, the Diary of Anonymous, A Pregnant Teenager," edited by Beatrice Sparks, Ph. D., is an epistolary written, as indicated in the title, in a diary format. Annie is a typical fourteen-year-old girl who is finds herself between childhood and adolescence as witnessed by her love of soccer and rollerblading as well as a growing interest in the opposite sex. Annie lives with her mother who is a high school teacher. Her father abandoned the family when Annie was just five. She often expresses her sadness in not having a father in her life.

One day as she is walking off the soccer field when she is sweaty and her clothes are grass-stained, Annie is stopped by the most handsome boy she has ever seen to talk. He tells her that he is looking for a friend. He is new at the school and does not know many kids. Annie cannot believe that this dream of a boy can be interested in her. She searches for him in the halls after that and finally spots him again. He is just as friendly and invites her out on a date. Since she is not allowed to date yet, Annie lies to her mother that she is going to a friend's house. Danny, who is sixteen, picks her up at her friend's house and they immediately hit it off.

Danny confides that he has been in a terrible car accident, spending months in traction and is a year behind in school. Annie feels sorry for him and is sure that he feels embarrassed about being older than the other kids. She feels protective of him and wants to always be there for him. They begin to do everything together. Things are going fine and Annie is in love and is sure that Danny is in love with her as well.

However, after one party, Danny becomes very aggressive and wants to go farther than what Annie is ready for. Danny becomes angry with her and Annie begins to feel guilty. She really wants Danny to be her boyfriend and eventually she gives in to his desires and they begin to have sex. Danny seemed to be too busy for her on many evenings before sex but the times he does have time for her, all they did is have sex. Sometimes the sex is rough and he often slaps and punches her. She tries to hold onto her fantasy that they are in love but finds out the brutal truth when she discovers in horror that she is pregnant.

Danny denies that the baby is his and if she pushes it, he says that the entire football team is prepared to say that she is a tramp and has sex with everyone. Annie is afraid to tell her mother and the only method she has for expressing her fears, anger, and confusion is through the entries that she makes in her diary which she refers to as "Daisy Diary." She records every step of her ordeal in her diary and even has imaginary conversations with Daisy who encourages her to talk to her mother.

Annie finally does just that and is surprised and relieved to discover that her mother is solidly behind her. Annie's mother helps her daughter take on a role that is far too adult for her young age and helps her decide on what is the best thing to do for herself and for her baby.

More summaries and resources for teaching or studying Annie's Baby: The Diary of Anonymous, a Pregnant Teenager.