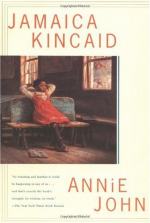 Jamaica Kincaid
This Study Guide consists of approximately 70 pages of chapter summaries, quotes, character analysis, themes, and more - everything you need to sharpen your knowledge of Annie John.

Ever since Jamaica Kincaid's work began appearing in The New Yorker magazine, it has excited critics and enthralled readers. Kincaid has been praised for her ability to tell the story of a girl attaining womanhood with all the emotion and beauty it deserves. Simultaneously, Kincaid expresses the significance and politics involved in that transition. Her second book, Annie John (1985), is comprised of short stories that first appeared in The New Yorker, Some critics consider Annie John a novel because the compilation of interwoven stories uncover the moral and psychological growth of the title character. This bildungsroman (coming-of-age story) has become Kincaid's best-known work to date.

Through Annie, Kincaid has brilliantly brought girlhood in the West Indies to literature as a masterful work of art. That art is a prose blend of European, American, and Caribbean folk forms of expression. The result is an effective rendering of a girl's struggle to discover her own identity. Annie is a girl growing up in an idyllic garden setting. At first she is the sole figure in that Eden she has only her parents and Miss Maynard to interact withand she maintains her sense of singularity when she finally begins mixing with others. Her omnipotent mother keeps the powers of the world and of death at a distance. Gradually, however, her mother introduces death and separation in order to mature Annie and prepare her for the world. The story of the mother creating the daughter is not unlike the works of Mary Shelley (Frankenstein ) or John Milton {Paradise Lost) in the sense that the created becomes more than the creator intended.

More summaries and resources for teaching or studying Annie John.

Annie John from Gale. ©2005-2006 Thomson Gale, a part of the Thomson Corporation. All rights reserved.