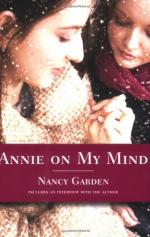 Annie on My Mind Summary & Study Guide includes comprehensive information and analysis to help you understand the book. This study guide contains the following sections:

This detailed literature summary also contains Topics for Discussion on Annie on My Mind by Nancy Garden.

Liza chronicles her love affair with a girl called Annie. Only seventeen and largely in an environment that doesn't accept homosexuality, they initially have to hide away their feelings. When they are eventually exposed however, it only makes them stronger and more determined to spend their lives together.

Annie and Liza first meet at the Metropolitian Museum in New York. They hit it off immediately, entertaining some children with a fake duel in the American Wing. Before they part, they exchange telephone numbers.

At her private school called Foster's, Liza attends the opening of her friend Sally's ear-piercing business. As school president, Liza is slightly taken aback at the blood around Jenny Piccolo's ear, but is happy to see Sally has taken all the right precautions. She has alcohol to sterilize the needle, ice to numb the ear, and a potato to stop the needle going in too far. Everything looked in order and so she is surprised when a freshman approaches her later in the corridor to tell Liza that the headmistress Mrs. Poindexter wants to see her in connection with Sally's ear piercing.

Mrs. Poindexter tells Liza that she has breached the reporting rule. Basically she saw Sally doing something wrong and yet failed to report it. As school president that is not good enough and she tells Liza that she will have to attend a student council meeting to find out her fate. It could be worse than normal because the school is looking for financers and such an incident could scare away potential investors. In fact, Jenny, the girl whose ear was infected, is the daughter of Mr. Piccolo who is one of the school's biggest supporters.

Back at home Liza is delighted to hear her friend Annie has rang. She immediately rings her back and the two girls arrange to meet at the Cloisters on Saturday.

At Liza's hearing, the school decide to suspend both her and Sally for one week. After that week Ms. Poindexter says she will put Liza's position school president to a vote of confidence.

Liza's parent's opinion of her suspension differs. Liza's father think Liza should have known better and certainly better than Sally, who he refers to as a twit. Liza's mother's opinion is more measured. She feels that the school has dealt with Liza too harshly. After all what did she really do that was that wrong?

Annie's opinion differs even more. At the meeting at the Cloisters, she tells Liza that she has never heard of anything so ridiculous. She attends a public school and they have problems everyday with drugs and violence where ear piercing would be seen as nothing. Liza agrees to visit Annie's school during her suspension.

Two visits to Annie's school open Liza's eyes to another reality. During her first visit, she is stopped by security at the door who want to know why she isn't at school. When Annie tells them she is suspended, they ask her to leave immediately. The second time Annie manages to sneak her into the cafeteria. Here Liza is shocked to see a boy swinging a bike chain around his head. Annie tells her it is normal behavior and as she can see most kids are ignoring him.

Back at her own school Liza is struggling to cope. On her first day she is reelected as school president, the students reward her with a warm round of applause, and Sally gives a rather strange speech. She says that she regrets her actions and to make it up she would like to raise funds for the school. Liza can't help but feel that the school has somehow forced Sally into it. Angry, she decides to phone Annie - her line back to reality.

Annie and Liza relationship deepens. They enjoy a romantic meal at an Italian restaurant and give each other gold rings as Christmas presents. The only problem is that soon as one tries to touch the other the other turns away. Their frustration builds into their first argument, but also clears the air. Eventually they agree to stop running away from their feelings.

Liza agrees to look after her teacher's - Ms. Widmer and Ms. Stevenson - cats while they are on holiday. It the first time that she has had a space to her own and sees it as the perfect opportunity for her and Annie to spend some private time together.

Every morning Annie and Liza meet at the house for breakfast and coffee. One day Annie works out from the books on their shelves that Ms. Widmer and Ms. Stevenson are gay. The discovery liberalizes the two girls and after a fantasy duel wearing saucepans as helmets, they fall onto Ms. Steven and Ms. Widmer's bed and kiss. Much later they are woken up by a loud knock at the door.

Liza opens the door to her friend Sally and her very religious teacher Ms. Baxter. Ms. Baxter brushes past Liza and seeing Annie upstairs demands she comes down while she searches through the bedrooms. What Ms. Baxter finds shocks her and when moments later Ms. Stevenson and Ms. Widmer are standing goggle eyed in the doorway, she accuses them with of interfering with minors. Before she leaves with Sally, she tells Ms. Widmer and Ms. Stevenson that she will be reporting them to the school.

Liza has no choice but to tell her parents about her sexuality. Her mother takes it badly, but her father is more supportive. Together he says they will go to Liza's hearing which will take place the following week.

It doesn't take long for the board of trustees to realize that Liza's hearing is a farce. As the red haired woman says it has nothing to do with the school whether Liza is gay or not. The more serious matter, she says, is the teacher's influence on the other students. A week later Liza is reinstated at school, but Ms. Stevenson and Ms. Widmer have been sacked.

Annie and Liza visit Ms. Widmer and Ms. Stevenson at their home. Ms. Widmer and Ms. Stevenson tell them they are retiring to their country home where they will spend their time painting and writing. In fact they tell Annie and Liza that their dismissal was probably the best thing that could have happened. They are also very supportive of Annie and Liza's relationship, telling them not to worry about what others think and say. They will always have each other.

Liza calls Annie from her university. They haven't spoken in months, but arrange to see each other during the holidays.

Annie on My Mind from BookRags. (c)2022 BookRags, Inc. All rights reserved.