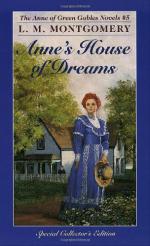 Lucy Maud Montgomery
This Study Guide consists of approximately 46 pages of chapter summaries, quotes, character analysis, themes, and more - everything you need to sharpen your knowledge of Anne's House of Dreams.

"Anne's House of Dreams" by L. M. Montgomery is the continuing story of Anne Shirley Blythe who lived in Green Gables. This book is the fifth in the "Anne of Green Gables" series. In this episode, Anne is twenty-five years old and is preparing for her wedding. She is going to marry young Gilbert Blythe who is an up and coming physician. They will be moving from Green Gables to Four Winds, a sleepy seaside community on Prince Edward Island in Nova Scotia. Anne, tall, slender and flame-haired, has been a teacher for three years at a school called Summerside. Gilbert Blythe has been after Anne for years and is finally going to make her his own.

After a small ceremony with family and close friends, the couple takes off from Green Gables to being their new life together. Anne cannot wait to get to the house where they will make that start. Gilbert doesn't want her to expect too much. The house is old and small and they will just be renting it. But Anne is not dissuaded from believing that the house will be her house of dreams especially when Gilbert tells her about the grounds around the house. It has many large old trees and a brook that runs through the property. And there are gardens that prior owners have cultivated. Anne has foregone having a honeymoon. To her the best honeymoon she can think of is being with Gilbert in their new residence.

Anne is not disappointed with her house. She enthusiastically decorates the inside and works diligently on the flower gardens outside. She loves walking around the grounds and at the beach on the harbor. The area is more beautiful than she had imagined. Anne becomes acquainted with some of the locals and forms some strong and lasting friendships with them. There is Captain Jim who operates the lighthouse. He's an old tar who entertains everyone with stories of his adventures on the sea. Jim is a sensitive and caring older man and feels an immediate affinity for Anne.

To say that Miss Cornelia Bryant is an opinionated woman would be a conservative statement. She is a proud Presbyterian who detests the Methodists and doesn't mind telling anyone within earshot. She is also a Conservative Tory and despises the liberals. And she feels that men will be the downfall of civilization. There are only a handful of men that she can tolerate. Cornelia has two favorite forms of recreation: sewing and reading the obituaries. But beneath all her bluster, Cornelia has a good heart and really wants the best for people.

Leslie Moore becomes Anne's best friend at Four Winds. Leslie is the most beautiful girl that Anne had ever seen. In fact, she is the most beautiful girl that most people had ever seen. She is in a loveless and unusual marriage but cannot escape. She has a history of tragedy in her life and sees no hope for the future. Anne is supportive of Leslie and tries to lift her spirits whenever possible. In a surprising twist in the story however, a whole new world eventually opens up for Leslie. It's a world filled with the promise of hope, love, and romance.

Anne associates good and bad memories with her house of dreams. Despite everything, she loves her little house and doesn't ever want to leave. But just when things are perfect, that's when they change. After they have a son, Gilbert hears about a large house for sale and wants to buy it. Anne resists the change and goes through much pain to finally come to the conclusion that it is time to move on. But Anne will never let go of the memories she made in her house of dreams and it will always have a special place in her heart.

More summaries and resources for teaching or studying Anne's House of Dreams.