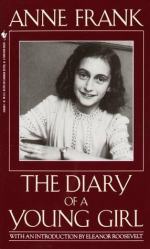 In her August 3rd entry, Anne reports that Dussel got angry with Mr. Kugler for turning in their radio as he was ordered. They’d also had three air raids that day. To make matters worse, Peter’s cat has infected the Annex with fleas. They are also stiff from lack of movement and exercise.

In her August 10th entry, Anne has decided that it would be best for her to talk to herself at dinner instead of talking out loud. She also...