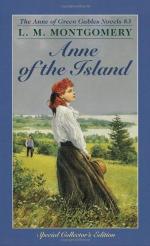 Lucy Maud Montgomery
This Study Guide consists of approximately 52 pages of chapter summaries, quotes, character analysis, themes, and more - everything you need to sharpen your knowledge of Anne of the Island.

Anne of the Island Summary & Study Guide includes comprehensive information and analysis to help you understand the book. This study guide contains the following sections:

This detailed literature summary also contains Topics for Discussion and a Free Quiz on Anne of the Island by Lucy Maud Montgomery.

ANNE OF THE ISLAND by L.M. Montgomery is the third in the Anne of Green Gables series. This book tells the story of Anne Shirley's and her friends' college years. As the security of home and childhood comforts fade, each must face the trials of being on their own.

Anne travels to Kingsport to go to college despite the mixed feelings among the family at home. Most of her family would like her to marry Gilbert Blythe, a close childhood friend. Gilbert is also going to Kingsport for college and would like nothing more than to have Anne reveal that she feels more than friendship for him. Anne is determined to get an education and not simply search for a husband as the busybodies at home expect. Anne is excited that one of her girlfriends, Priscilla, is also attending Redmond College.

At home, Anne's best friend Diana is engaged to Fred and living the home life. Despite being separated by interests and distance, each visit home reaffirms that a long distance friendship can survive. Every visit home teaches Anne to appreciate her past, and her future and gives her a sense of balance in her life.

While at college, Anne makes a new friend, Philippa, who is unlike any friend that she has ever had. Philippa is a flighty, indecisive, loyal, and smart friend whose beauty and popularity thrust Anne and Priscilla into the limelight at school. Philippa is determined to marry a rich man but is unable to determine who that may be as she has many beaus including two boys at home that have proposed.

The three girls move in together into a comfortable home called Patty's Place and learn how to work and live together. Despite Philippa's family's monetary connections, she learns how to do chores and live in a less than perfect situation and even relishes the changes to her life. Anne is a good influence on all her friends by making them realize that what they have and what they expect is only important if they first have the love and loyalty of family and friends.

When Gilbert proposes to Anne in their second year of college, she turns him down telling him that she does not love him. She wants to stay friends but their friendship is not the same afterward, and Anne feels the loss keenly. She starts dating a charming, rich guy, Roy Gardner who gives her the "thrilling" life she wants. Anne becomes close friends with Roy's sister Dorothy and both relationships flourish.

After four years of college, Philippa finds love with a poor preacher whom she adores despite his poverty. She has learned the value of love over monetary considerations from Anne.

When Roy proposes, Anne realizes that he excites her but she is not in love with him. When Gilbert almost dies from typhoid fever, Anne realizes she loves him and wants a life with her childhood friend. He will always be the light and love of her life.

More summaries and resources for teaching or studying Anne of the Island.

Anne of the Island from BookRags. (c)2021 BookRags, Inc. All rights reserved.