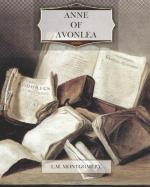 Plot Summary
+Chapters Summary and Analysis
Chapters 1 - 3: An Irate Neighbor, Selling in Haste and Repenting at Leisure, Mr. Harrison at Home
Chapters 4 - 6: Different Opinions, A Full-Fledged Schoolma'am, All Sorts and Conditions
Chapters 7 - 9: The Pointing of Duty, Marilla Adopts Twins, A Question of Color
Chapter 10 - 12: Davy in Search of a Sensation, Facts and Fancies, A Jonah Day
Chapter 13 - 15: A Golden Picnic, A Danger Averted, The Beginning of Vacation
Chapter 16 - 18: The Substance of Things Hoped For, A Chapter of Accidents, An Adventure of the Tory Road
Chapter 19 - 20: Just a Happy Day, The Way It Often Happens
Chapter 21 - 23: Sweet Miss Lavendar, Odds and Ends, Miss Lavendar's Romance
Chapter 24 - 25: A Prophet in His Own Country, An Avonlea Scandal
Chapter 26 - 27: Around the Bend, An Afternoon at the Stone House
Chapter 28 - 30: The Prince Comes Back to the Enchanted Palace, Poetry and Prose, A Wedding at the Stone House
Characters
Objects/Places
Themes
Style
Quotes
Topics for Discussion
Order our Anne of Avonlea Study Guide

Lucy Maud Montgomery
This Study Guide consists of approximately 51 pages of chapter summaries, quotes, character analysis, themes, and more - everything you need to sharpen your knowledge of Anne of Avonlea.

Ginger is Mr. Harrison's pet parrot, a gift from his sailor brother. Ginger has a bad habit of swearing and repeating the most impolite things at the wrong time. Ginger drove a wedge in the marriage of Mr. and Mrs. Harrison that lead to their separation and his move to Avonlea. Ginger is killed during a terrible hail and lightning storm accidentally predicted by Anne and Gilbert.

The Avonlea Village Improvement Society, often referred to as the A.V.I.S., is an...

More summaries and resources for teaching or studying Anne of Avonlea.