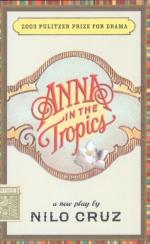 Still photographs of the cast that performed Anna in the Tropics at the Royal Theatre in New York may be downloaded by opening a Web browser to http://www.playbill.com/multimedia/search/3239.html and clicking on the thumbnail images.

Anna Karenina was first made into a film in 1915, though the 1935 version, starring Greta Garbo as Anna and Fredric March as Vronsky, is perhaps the most well known. Many versions of the Tolstoy classic have appeared on both the silver screen and television in the years since, with a miniseries directed by Sergei Solovyov scheduled for broadcast in 2005.