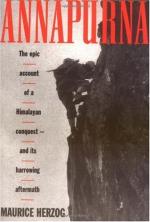 Maurice Herzog
This Study Guide consists of approximately 28 pages of chapter summaries, quotes, character analysis, themes, and more - everything you need to sharpen your knowledge of Annapurna.

This detailed literature summary also contains Topics for Discussion and a Free Quiz on Annapurna by Maurice Herzog.

"Annapurna" is Maurice Herzog's account of the first expedition to ever climb a mountain higher than 8,000 meters: the Annapurna peak in the Himalayas of Nepal. Herzog, the leader of the French expedition, is one of two climbers who reach the summit, along with Louis Lachenal. Facing tremendous difficulties from the terrain, altitude sickness, severe weather and cold, the team makes its way back out of the mountains with Herzog and Lachenal carried by porters.

The expedition is mounted by the French Alpine Club to go to the region of the peaks of Dhaulagiri and Annapurna in Nepal to explore possible routes to either summit, and to attempt to climb one of them should a suitable route be found. The expedition treks to the village of Tukucha, roughly between the two peaks, where they set up a base of operations.

After several attempts to explore Dhauligiri, the expedition decides the conditions are too dangerous to make an attempt on that peak. They turn their attentions to Annapurna. Herzog leads a small team to the north of the mountain. However, discovering that a great barrier of mountains blocks access from that route, they are unable to even see the peak. He retraces his route and looks farther to the south.

After identifying a route to the northern face of Annapurna, the expedition, aided by Sherpa guides and native porters, sets up a base camp from which a series of higher camps will be established. Eventually six camps are placed up the mountain, with Camp V at the foot of a long snow field that leads to the summit.

It is from Camp V that Herzog and Lachenal make their historic climb on June 3, 1950. Their feet begin to freeze during the climb and Herzog loses his gloves, but the men reach the summit and make their way back down. They reach Camp V, but become lost, along with two other climbers, as they descend from there. Herzog also suffers a fall on the way down, as his hands and feet become frostbitten. Temporarily ignoring his injuries, he assists two Sherpas in descending down to Camp II, where they will be more safe from the risk of avalanche brought on by the warmer temperatures that come with the annual monsoon storms.

Herzog and Lachenal are treated by the expedition doctor, but each must have his toes amputated, and Herzog loses most of his fingers. They are carried out of the mountains as the expedition makes its way back to India and then to France. Before his departure, Herzog is honored for his bravery by the Maharajah of Nepal.

More summaries and resources for teaching or studying Annapurna.