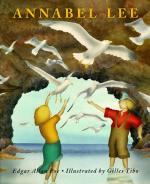 Edgar Allan Poe
This Study Guide consists of approximately 39 pages of chapter summaries, quotes, character analysis, themes, and more - everything you need to sharpen your knowledge of Annabel Lee.

The poems by Poe that are most often associated with this one are "Lenore" and "To Helen," which are also about the deaths of young women. All of his works can be found in the Library of America's superior collection Edgar Allen Poe: Poetry and Tales, published in 1984.

Poe is considered the first serious literary critic in America. His ideas about art are evident in his nonfiction prose, collected in a different Library of America volume entitled Edgar Allan Poe, Essays and Reviews: Theory of Poetry, Reviews of British and Continental Authors, Reviews of American Authors and American Literature.

Tundra Books has a hardcover book-length edition of this poem, released in 1987. Annabel Lee has text by Edgar Allan Poe and watercolors by award-winning children's book artist Gilles Tibo. It is usually cataloged with children's books.

One of the best biographies...

More summaries and resources for teaching or studying Annabel Lee.

Annabel Lee from Gale. ©2005-2006 Thomson Gale, a part of the Thomson Corporation. All rights reserved.