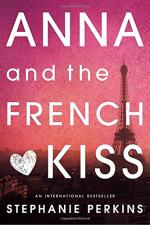 Stephanie Perkins
This Study Guide consists of approximately 40 pages of chapter summaries, quotes, character analysis, themes, and more - everything you need to sharpen your knowledge of Anna and the French Kiss.

Anna and the French Kiss Summary & Study Guide includes comprehensive information and analysis to help you understand the book. This study guide contains the following sections:

This detailed literature summary also contains Quotes and a Free Quiz on Anna and the French Kiss by Stephanie Perkins.

The following version of this book was used to create this study guide: Perkins, Stephanie. Anna and the French Kiss. Dutton Books, 2010. Kindle.

Anna and the French Kiss, a young adult novel by Stephanie Perkins, is narrated in first-person-present by seventeen-year-old Anna Oliphant. Anna’s father, a pompous popular author, has decided to send her to boarding school in Paris for her senior year of high school. Anna is happy with her life in Atlanta. She works in a movie theater and writes a blog about film theory and criticism. Her best friend goes to high school with her. The boy she has liked forever has finally kissed her. She does not want to go to Paris, but she has no choice. Her father and mother fly with her to Paris and drop her off at her dorm. When they leave her alone, she cries into her pillow until her next-door-neighbor, Meredith, hears her sobs and invites her over for hot chocolate.

The next day, Meredith makes a point to invite Anna to sit with her at lunch and meet her friends: Josh, Rashmi, and the extremely attractive and charming Étienne St. Clair. Anna is immediately attracted to him, but she quickly learns he is dating Meredith’s best friend, Ellie, who moved across town to go to college after graduating last year. Anna spends her first week in Paris shut in her dorm room alone, talking to her best friend, Bridge, on the phone and through email. She intends to do the same thing all weekend, but then St. Clair comes to her room and invites her to come see the city with him. They go to the center of the city, and Anna makes a wish on the magical star. Because she does not know whether or not she wants to be in Paris, she wishes for whatever is best for her. On the way back, she realizes that Paris is full of theaters, and she warms up to the city a little more.

Anna continues to spend time with St. Clair as a friend, but he spends most of his free time with Ellie. To distract herself from her jealousy, Anna dedicates herself to exploring all the theaters in the city, but she is continually distracted by her growing feelings for St. Clair. On Halloween, they all go to a cemetery, but St. Clair gets a phone call from his mother, who tells him she has cancer. He leaves and goes out drinking with Josh. He then comes back to Anna’s dorm wasted. He tells her he likes her and asks her if she likes him. He throws up all over her room. When he asks her about their conversation, she lies and tells him that he did not say anything because she does not want to cause additional stress while his mother is sick.

Over Thanksgiving break, Annie and St. Clair are the only two students who stay on campus. Anna brings St. Clair out of his depressed state and gets him to get out of bed, shower, and clean his room. They go out all day and explore the city. At night, he asks if he can stay with her because he does not want to be alone, and she agrees. For the whole weekend, they do not do anything without each other. When everyone comes back, though, things revert to normal between them, and Anna feels hurt. They fight until Christmas break, when they share a plane back home to the United States. Anna is excited to see Bridge and Toph. However, when she returns to Atlanta, she learns that the two of them have started dating. She calls St. Clair, and he comforts her. Then, they spend the whole holiday talking on the phone and emailing with one another.

When Anna gets back to Paris, she realizes that she is in love with her best friend. She hopes that he will break up with Ellie, because he seems to share her feelings, but nothing changes. On her birthday, Anna gets drunk and dances with St. Clair for hours. Ellie’s roommate sees them and calls her. St. Clair gets upset, and Anna demands that he tell her why he will not break up with Ellie. He says that he does not want to be alone, and she tells him never to speak with her again. The next day, they apologize to one another and St. Clair begs her to give him more time to figure everything out. Anna begins dating a boy named Dave, but things quickly fizzle out.

As Spring blooms, Anna and St. Clair go to Meredith’s football game and watch her play. They sneak out halfway and go to a park. They finally kiss, but Meredith, Rashmi, and Josh interrupt them. Meredith runs away crying because she has a crush on St. Clair, and Anna feels rejected by him again. When he goes to Ellie’s afterwards, Anna assumes the worst and tells him she is finished with him.

Anna makes up with Meredith and Bridge. She learns that after she and St. Clair kissed, he was only with Ellie for the purpose of breaking up with her. Anna makes plans to go to San Francisco for college, and St. Clair decides to follow her to Berkley. Before leaving Paris, Anna goes to Notre Dame alone, and St. Clair follows her up to the top even though he is afraid of heights. He tells her he loves her, and she returns the sentiment before they end on a happily-ever-after note.

More summaries and resources for teaching or studying Anna and the French Kiss.

Anna and the French Kiss from BookRags. (c)2022 BookRags, Inc. All rights reserved.