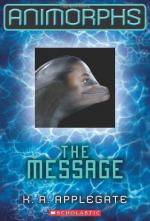 K. A. Applegate
This Study Guide consists of approximately 30 pages of chapter summaries, quotes, character analysis, themes, and more - everything you need to sharpen your knowledge of Animorphs #4.

This detailed literature summary also contains Topics for Discussion on Animorphs #4: The Message by K. A. Applegate.

"Animorphs - The Message" by K. A. Applegate is the story of five friends who are Animorphs or humans who can take on the form of any animal that they have DNA mapping for. The story begins with the protagonist, Cassie, who is morphing herself into a squirrel. She wants to be small enough to hide and watch for the predator who has been coming into the barn on her family's farm at night and stealing birds that she and her father have been trying to nurse back to health.

Cassie comes from a family of animal lovers. Her father is the head vet at the Wildlife Rehabilitation Clinic and her mother is a vet at the zoo at The Gardens. The guilty party, a fox enters the barn and is spooked with Cassie as a squirrel jumps down from the rafters. The fox chases Cassie but she is saved when Tobias, another member of the Animorphs, swoops down on him and chases him away. Tobias tells Cassie that he was ready to eat her until he realized that she had morphed into the squirrel. Tobias is a human locked in the body of a red-tailed hawk. After morphing into the hawk, he was unable to morph back to his human form. When they are in a morphed state, they communicate telepathically or as they call it through thought-speak.

Cassie and Tobias have both been having dreams about someone in distress calling to them for help from the sea. They tell the other members of their group - Jake, the leader, Marco, and Rachel - about their shared visions. Jake has a news clip showing a man who discovered a piece of scrap metal that washed ashore. Due to the strange writing on the scrap, the kids are almost sure that it was a remnant from a crashed Andalite spaceship. The writing is identical to the writing on the Andalite spaceship that Jake had boarded when he was given the secret to morphing.

The scrap from the ocean coupled with the dreams that Cassie and Tobias are having, cinches it for the friends. The have a big problem however since the evil Yeerks, also alien beings, will be after them and the Andalite they will be trying to rescue.They decide that despite the risk, they must act. They'd all morphed into trout before but they needed to morph into a creature that could withstand the sea water, be big enough not to be prey and be able to swim very fast. There was only one animal that fit the bill - the dolphin. The mission begins in a river that deltas into the ocean. They morph themselves into dolphins and swim down the river into the sea. They are having so much fun in their sleek strong new bodies that they forget about their mission. They lose focus and have to tangle with some hungry tiger sharks. When the sharks attack a large whale nearby, the Animorphs go into action and save the whale. They made a friend forever and one that would repay the favor later.

The Animorphs discover a large domed park underneath the water. Once inside they encounter Ax, the young Andalite who was putting out the distress signal. In the end the Animorphs are able to rescue Ax and save planet earth and all its species but there were many obstacles to that success. They have to fight off the Yeerks, the Controllers - the puppets of the Yeerks - and the much feared leader of the Yeerks, Visser Three. The whale that they rescued from the sharks totes them back to shore on his back. Ax is able to morph into a human so that he can pass through town without notice. After everyone is back home and safe, Cassie visits the dolphin tank at the zoo. She slips into the water and morphs into a dolphin. Then she plays and romps with the the happy and free spirited animals.

More summaries and resources for teaching or studying Animorphs #4: The Message.