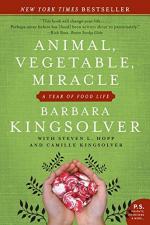 Barbara Kingsolver
This Study Guide consists of approximately 47 pages of chapter summaries, quotes, character analysis, themes, and more - everything you need to sharpen your knowledge of Animal, Vegetable, Miracle.

Barbara Kingsolver's family consists of her husband, Steven L. Hopp, and daughters Camille and Lily. They lived in Tucson, Arizona, where she began to feel that they were an unnecessary drain on local resources, especially water. The family owned property in the Appalachia region and spent their summers there. When Camille was a year away from college and Lily was about to enter third grade, the family made the permanent move to the farm.

They spent some time settling into their new lives with plans to begin a year-long experiment aimed at eating local food. They had multiple reasons and goals, but the main two were taste and the desire to lessen their impact on the negative side of food consumption. The taste was easy to explain. Food that was grown in their own gardens or in the gardens of their neighbors was fresher and naturally tasted better. The second part of their reason was more complex and more difficult to explain.

Most commercial farmers use an array of chemicals in their production of food. They spray for weeds and pests. Many modern commercial seeds are genetically altered to handle diseases and maximize yield. These changes have impacted taste and quality, but also introduce negative chemicals, including carcinogens, to the land, water, animals, and even the humans who consume them. Choosing organically grown produce can make a difference on this front, but large operations do not always consider what was on the land in previous years.

Probably the most important aspect of the experiment for Barbara's family was the desire to lessen their carbon footprint. Their food choices could do that. They stopped buying produce that was shipped long distances. They stopped buying food that had to be hauled in refrigerated trucks. They cited the extremely high cost of producing and transporting processed corn syrup and eliminated all foods that used it, including sodas. The cost of fuel for shipping and handling was a major factor in their buying decisions.

Another factor was the farms where the food was raised. Barbara talked about some “experts” who insisted it was the duty of Americans to buy from the foreign farmers who depended on their jobs as a means of life. She said that farmer lived a substandard life because of his dependence on foreign companies for a subsistence wage. She cited the work of organizations that were helping introduce programs that would ultimately help that farmer provide a better life for his family by raising his own food.

While vegetables and fruits were a big part of their experiment, they also needed to change their meat choices as well. They had stopped buying meat altogether for awhile because they hated the conditions the animals faced. They returned to buying meat but raised some of their own and bought the rest from local farmers, so they knew the animals had a clean, good life. Barbara and the rest of the family dreaded slaughtering their animals, but they did it as part of their lifestyle.

Both Barbara and Steven address the idea that people can make a difference in their own lives without going to an extreme. Barbara compares it to a person who begins to exercise three days a week, saying that is a difference that can matter, and that no one will criticize them for not exercising seven days a week. They each give suggestions for making choices that would lessen the carbon footprint of each family, pointing out that every small change can add up to saving the planet for the next generation.