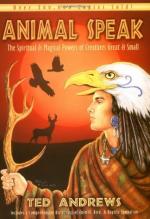 Ted Andrews
This Study Guide consists of approximately 27 pages of chapter summaries, quotes, character analysis, themes, and more - everything you need to sharpen your knowledge of Animal-speak.

This detailed literature summary also contains Topics for Discussion and a Free Quiz on Animal-speak: The Spiritual & Magical Powers of Creatures Great & Small by Ted Andrews.

This is a metaphysical book. It is directed towards people who like to engage with animals, plants, and the elements of nature in addition to communing with the divine through prayer, temples and Jesus teachings. The author Ted Andrews knows that he is working with pagan material and with aspects of spirituality that need not be viewed as anti-Christian. It is, however, quite different. Here, the interrelatedness between individual people and animals is emphasized.

People have a long history of living in the world together with animals, and of feeling the need for connection. It is a well known fact that some animals have special connections with people. This is the case whenever animals have been hunting partners, guardians, or providers of needed services or products- such as milk and eggs. The species that are most commonly pets have often had such a special service role- be they cats that hunt out mice, and thereby protect the family's food, or the horse- which has born many a burden and greatly assisted in transportation of people and of goods.

The author takes people further with these. Past the valuable and real benefits of the work of cows and sled dogs, Ted Andrews takes readers to the level of the 'totem' animal. These are creatures who have knowledge and ways that are intimately related with one another. They also can have specific types of connections with humans. There are animals which resonate more with some individuals than with others. Just as people find that they harbor preferences for some of those they meet, but not all, there are 'cat people' and 'dog people' - that is people who do well with cats, or with dogs. Some resonate equally well with both, others do not.

By the time Ted Andrews has provided extensive analysis of many factors that play into how a given individual human can find his or her totem animal, or animals, readers will have been well prepared for handling having one or more such 'totem animals'. The author supplies readers with basic instructions on how to cultivate relationships to totem animals. He also provides two dictionaries in this book to show readers just some of the kinds of the information that may be needed as part of a good understanding between totem animals.