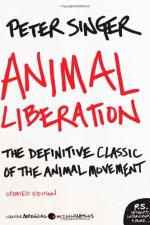 Animal Liberation: The Definitive Classic of the Animal Movement Summary & Study Guide includes comprehensive information and analysis to help you understand the book. This study guide contains the following sections:

This detailed literature summary also contains Topics for Discussion on Animal Liberation: The Definitive Classic of the Animal Movement by Peter Singer.

"Animal Liberation" by Peter Singer was first published in 1975 and this volume is the second update of the book, published in 2002. Singer has shed bright light on the abuse that animals endure at the hands of man. Prior to the book's first edition, the wholesale mistreatment of animals was largely in the shadows.

Singer puts the blame for animal abuse at the feet of "speciesism." The term, "speciesism" was coined by Singer and is defined as a focused concern for the welfare and rights of one's own species. Humans are, generally speaking, speciesists and this enables them to abuse animals. This attitude is in the fabric of human thought. It had its roots in Greek antiquity and ancient Hebrew laws. Aristotle believed that animals existed for man's use. The ancient Hebrews looked to the Old Testament of the Holy Bible for guidance about man's treatment of animals. It was written that man was created in God's image and that man had dominion over all other creatures.

The fundamental beliefs of Aristotle and the ancient Hebrews were melded and solidified when Christianity was established under the Holy Roman Empire. Since that day, man has been taught that he is superior to animals. Any rights that might be attached to animals, are subjugated to man's needs and desires. Speciesism is the main obstacle in the elimination of cruelty to animals.

There are two blatant and widespread abuses of animals that has come to be accepted by people of the civilized world. The first is the use of animals for lab experimentation. The animals are subjected to pain and misery and the process often leads to death. There are government regulations covering the treatment of lab animals. However, the laws are weak and unenforced. Powerful corporations and their lobbyists fight against them. Most of the enforcement against cruelty inflicted on lab animals is on behalf of dogs and cats - the animals that people care about. However, the mistreatment of rodents, monkeys, and other animals that do not impact the average person's life largely goes unchecked.

Animals that are raised in farm factories are mistreated and live a miserable life from birth to their usually early deaths. Cows, pigs, and chickens are jammed into indoor facilities that are uncomfortable, filthy, stressful, and endanger their lives. The top priority for the producers is their bottom line. The process is strictly driven by profits with little or no concern for the welfare of the animals. Most of these animals live in a crowded cage and never see the light of day or breathe fresh air during their entire existence.

Once an individual faces the inequality that exists in man's treatment of animals and sets aside his speciesism, the only result that can occur is a vow to not eat animals. Vegetarianism provides a healthier diet than does one that contains meat. By refusing to eat animals or buy leather items and other products made from animals, the need for animals will be reduced, resulting in less animal abuse. Many animal rights group have been established and are making progress in decreasing the mistreatment of animals. However, for the abuse to be ultimately eliminated, each person must abandon the speciesism that our society has instilled within him.