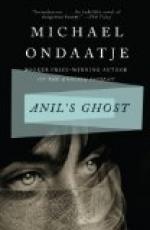 This detailed literature summary also contains Quotes and a Free Quiz on Anil's Ghost by .

The following version of this book was used to create the guide: Ondaatje, Michael. Anil's Ghost. Vintage Books, 2000.

Anil’s Ghost, a novel broken into eight sections, is set in Sri Lanka in the 1980s and early 1990s, when the counter-insurgency government, insurgent rebels in the south, and separatist guerrillas in the north have led the country into war. “Sarath” opens with Anil Tissera, a forensic scientist, arrives in Sri Lanka. Although she grew up in Sri Lanka, Anil has not returned to the country for fifteen years. She has been sent by the U.N. to be partnered with a local archaeologist, Sarath Diyasena. Together, the two of them begin to investigate four skeletons that were found in an ancient burial ground controlled by the government. Three of them are from the sixth-century; however, one of them is from the recent twentieth-century. They nickname this fourth skeleton Sailor, and Anil insists that they work to discover who killed Sailor.

In “The Grove of Ascetics,” Sarath takes Anil to a forest monastery where his old mentor, an epigraphist named Palipana who is now in his seventies, lives. Palipana describes the traditional ceremony of Netra Mangala, in which a specially appointed artist paints the eyes onto a holy figure such as a statue of Buddha; only then can the statue be considered holy. Palipana points them towards an artist Ananda Udugama. Driving back to Colombo, they come across a man who has been terrorized, his hands nailed to the tarmac. Anil and Sarath decide to take him to Sarath’s brother Gamini, a doctor.

In “A Brother,” Gamini reflects on the years that he has spent working in various hospitals, in the northeast provinces and now in Colombo. Sarath and Anil reflect on their experiences, Anil in the American Southwest where she worked for a time, and Sarath in Colombo. In “The Mouse,” the reader learns more about Gamini’s love interests, including his brother Sarath’s wife, and his childhood.

In “Between Heartbeats,” Gamini recalls a complicated heart procedure he once performed on a young boy; although he fell in love with the nurse who helped him on that surgery, she was married. Anil reflects on her close relationship with Leaf Niedecker, an American woman and forensic scientist. They used to watch old movies together, puzzling over where the different actors were stricken with bullets. Gamini tells Anil the story of the death of Sarath’s wife, who remains unnamed. She committed suicide, and though Gamini tried to save her, he could not. Anil learns that Leaf has Alzheimer’s.

In “The Life Wheel,” Sarath and Anil finally identify Sailor as Ruwan Kumura, a former toddy tapper turned mineworker. He was accused of being a rebel sympathizer and taken away. When Sarath disappears, Anil goes to Colombo where she gives a report of their findings to a small auditorium full of government and police personnel. Although Sarath discredits her findings publicly, he arranges for her to finish her report and escape the country. The next day, Gamini is assessing the various bodies brought into the morgue and finds Sarath among them. In “Distance,” Ananda completes a Netra Mangala ceremony.