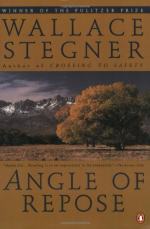 This detailed literature summary also contains Topics for Discussion on Angle of Repose by Wallace Stegner.

Angle of Repose by Wallace Stegner is a Pulitzer Prize winning novel about marriage. It is told by a former college professor and historian who looks at his grandparents’ lives in search of a reason for the success or failure of a marriage.

Lyman Ward is confined to a wheelchair for he suffers from a bone disease and has had to have his leg amputated. His wife left him, while he was convalescing in the hospital. She left a note informing him she was leaving him for his surgeon. This has left him bitter and defeated. Lyman has moved into his grandparents’ home in an effort to go through his grandmother’s papers and write a novel about her life. She had a fascinating life as a writer and artist in the middle to late 1800s. What starts as a novel about her life turns into an examination of her marriage.

Lyman’s grandparents, Susan and Oliver Ward, had a difficult and troubling marriage, but stayed together for sixty years. Lyman looks at their lives and how they dealt with tragedy, infidelity, long separations, and jealousy to come to an understanding about his own life. He is helped in his endeavors by a young college dropout who has left her husband because of his infidelity. Together they look through his grandmother’s papers and learn about themselves, while Susan Ward tells her story through letters she wrote to her best friend.

Lyman learns that marriage is difficult no matter the era or one’s age. His grandparents made mistakes and he tries to learn from those mistakes to help him not become bitter toward his ex-wife. Lyman wants to learn to forgive her so that he can release his burden and be a better person.