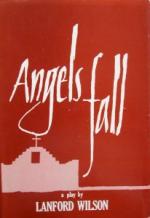 Lanford Wilson
This Study Guide consists of approximately 29 pages of chapter summaries, quotes, character analysis, themes, and more - everything you need to sharpen your knowledge of Angels Fall.

More than twenty years after its debut, Lanford Wilson's Angels Fall continues to be a little-known and rarely produced play. Commissioned by the New World Festival of Miami, Florida, in 1982, it moved to the Circle Repertory Theater in New York later that year. In 1983, despite a brief run on Broadway, New York drama critic John Simon judged it as the best American play that season. Unlike the familiar urban and Midwestern settings of Wilson's previous plays, Angels Fall is set in a church in the desert of the American Southwest. The catalyst for the play's actiona nuclear accident at a uranium mine that forces a group of people to take refuge at a Catholic missionis more overtly political than many of his other plays and can even be seen, particularly through the figure of Father Doherty, as a morality tale about the nuclear age.

Although the accident at Chin Rock mine alludes to a broader theme of Wilson's that concerns the destruction of the a national heritage as found in the stark natural beauty of the Southwest, another key theme unravels as the characters gathered at the church begin to interact. What is most compelling about the play is its ability to conjure up complex feelings in the characters about the direction their lives have taken, particularly as it concerns their occupations. For some, such as the tennis player Zappy, there is no ambivalence regarding vocation. Contrast that with Don Tabaha, whose choices will have an effect not just on him but the community of Native Americans with whom he has spent his life. Thus, a main question that Wilson pursues throughout the play reveals a concern with being satisfied with the kind of work one has chosen to do. One's work or vocation must have a function that moves beyond economic need. For this cast of professionals, work must be meaningful or else one's life has not been lived as fully as it could have been. The absent presence of an environmental disaster as a backdrop to the play compels the characters to confront, if it is only momentarily, how to live fully in the time given doing work that is satisfying.

More summaries and resources for teaching or studying Angels Fall.

Angels Fall from Gale. ©2005-2006 Thomson Gale, a part of the Thomson Corporation. All rights reserved.