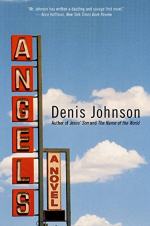 Denis Johnson
This Study Guide consists of approximately 35 pages of chapter summaries, quotes, character analysis, themes, and more - everything you need to sharpen your knowledge of Angels.

This detailed literature summary also contains Quotes and a Free Quiz on Angels: A Novel by Denis Johnson.

The following version of this book was used to create this study guide: Johnson, Denis. Angels. New York: Harper Perennial, 2002.

Angels takes place in the late 1970s, when it was written. It opens in Oakland, California, as a woman named Jamie boards a bus with her young daughters, Miranda and Baby Ellen. She is leaving her husband after she discovered that he was having an affair. As the bus passes through Ohio, a man named Bill Houston boards the bus. He converses with Jamie, and they drink beer together. Bill is an ex-convict and a former member of the United States Navy. Jamie had planned to movie in with her sister-in-law in Hershey, Pennsylvania. However, she agrees to first spend time with Bill. Jamie, her children, and Bill check in to a motel in Pittsburgh. Jamie and Bill spend the next few days together in Pittsburgh. Bill is an alcoholic and spends much of his money on alcohol. One night, he burns most of his money during a drunken fit. Soon after, he boards a bus heading to Chicago.

Jamie soon decides that she wishes to see Bill again, so she also boards a bus for Chicago, still accompanied by her young children. In Chicago, she is approached by a stranger named Ned. Jamie goes with Ned to his apartment. There, Ned drugs and rapes Jamie. Soon after, Jamie and her children reunite with Bill. They all travel together to Phoenix, Arizona, where Bill’s mother lives. Bill’s half brothers, James and Burris, live nearby. Bill’s mother, Mrs. Houston, is a devout Christian who fears that her sons may all be doomed to lives of immorality and poor judgment. Bill, Jamie, and Jamie’s children stay with Mrs. Houston. James makes money by working with a career criminal named Dwight Snow. Burris is a heroin addict who works at a nearby factory. Dwight recruits the three Houston brothers to be accomplices with him in a bank robbery. The robbery goes awry when a bank guard shoots James in the abdomen. Bill shoots and kills the guard. Dwight and the three Houston brothers are all arrested.

Jamie suffers a mental breakdown and is committed to the psychiatric ward of the Arizona State Hospital. Bill is charged with murder and is appointed a public defender named Samuel Fredericks. James recovers from his gunshot wound. Fredericks explains to Bill that Bill will likely be executed if he is convicted of first-degree murder. In the psychiatric ward, Jamie suffers delusions and acts hostilely towards the staff. During Bill’s trial, he is never called to the witness stand. He is convicted of murder and is sentenced to be executed. Jamie eventually recovers in the hospital. Before she is discharged, she is registered for welfare and an outpatient rehabilitation program. She feels relatively hopeful regarding her future, and she is determined to eventually reclaim custody of her children. Bill is soon executed. The novel ends from Fredericks’ perspective as he contemplates the moral, legal, and philosophical implications of Bill’s death.

More summaries and resources for teaching or studying Angels: A Novel.