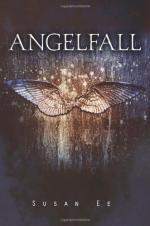 Susan Ee
This Study Guide consists of approximately 25 pages of chapter summaries, quotes, character analysis, themes, and more - everything you need to sharpen your knowledge of Angelfall.

This detailed literature summary also contains Topics for Discussion and a Free Quiz on Angelfall by Susan Ee.

"Angelfall" is a young adult novel by Susan Ee and revolves around a post-apocalyptic California, and the attempts of seventeen year-old Penryn Young to rescue her kidnapped sister.

When the novel begins, the Apocalypse has come. Penryn, her mentally imbalanced mother, and Penryn's little sister, wheelchair-bound Paige, prepare to flee from Silicon Valley into the hills. Their escape is interrupted by a fight between the angel Raffe (Raphael) and five challengers. Raffe manages to fend off the angels, though he becomes seriously wounded, and the lead angel, Beliel, cuts off Raffe's wings. Paige is then kidnapped and their mother runs away. Penryn helps nurse Raffe back to health, and asks him to help her find her sister. He is reluctant to do so, but decides he must help if he wants the chance of having his wings reattached.

Penryn and Raffe travel north, and fall in with a militia resistance group, determined to fight back against the angels that have invaded Earth. They are led by a good man named Obadiah, who wants to give people hope by fighting back. Penryn and Raffe leave and continue north to the angel aerie in San Francisco, at a 1920s-themed club. Raffe has no idea what the angels are doing -none of them do. They simply act on orders, but without Gabriel, God's Messenger, they have no idea what they are supposed to do. Politics have broken out among the angels, seeking to nominate the next Messenger. Raffe is in consideration. While at the club's basement, Penryn finds her sister, who has been torn apart and stitched back together. She is now an automaton, with little independence of her own -but she can walk again. Raffe goes to see the angel Laylah, who can reattach his wings, but betrays him by putting Raffe's wings on Uriel, Beliel's boss. Uriel's demonic wings are given to Raffe. A scorpion fetus creature paralyzes Penryn as the resistance attacks the club, killing many angels, and Raffe brings Penryn to safety. The victory is celebrated, and Penryn, her mother, and Paige leave with the resistance, while Raffe goes off on his own, able to fly once more.

More summaries and resources for teaching or studying Angelfall.

Angelfall from Gale. ©2005-2006 Thomson Gale, a part of the Thomson Corporation. All rights reserved.