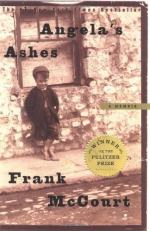 Angela’s Ashes is an autobiography written by the late Irish-American author Frank McCourt. The book is essentially the story of his life as a poverty-stricken boy growing up with a struggling mother, an alcoholic father, and a family of siblings, including three who die as infants.

McCourt begins the book by describing how his parents met in Brooklyn, New York, his mother, Angela, becoming pregnant with Frank. For that reason, she marries the father of her child, Malachy McCourt. For the next 20 years, Angela struggles to feed her family while Malachy, proud and often unemployed, drinks away his wages.

A series of tragedies befall the McCourts, including the death of Frank’s baby sister, Margaret, and twin brothers Eugene and Oliver.

After the death of Margaret and Angela’s ensuing depression, family members insist the McCourts return to Ireland, where they might find support from Angela’s mother. But everyone in Ireland is poor, hunger is an ever-present theme, and the McCourts struggle even more in their home country.

Despite the family’s struggles, Angela’s Ashes is also a book filled with Irish humor, folklore and music. In spite of his struggles, Malachy is also a tender father who entertains Frank with Irish folktales and songs. Angela later gives birth to two more sons, Michael and Alphonsus.

At the age of 10, Frank makes his confirmation, then becomes ill with typhoid fever. During an extended stay in the hospital, he reads all kinds of books, including Shakespeare, which he loves.

When World War II breaks out, Malachy leaves for England to find a job, as did most of the men in Ireland, with the promise he would send money back to the family. But the promise never materializes and Frank must begin working odd jobs to help support the family. His jobs, for a variety of interesting individuals, instill confidence in the young man and he dreams of saving enough money to support the family and to leave Ireland for the United States.

In the final chapters of Angela’s Ashes, Frank meets a young woman, Theresa Carmody, with whom he has a sexual relationship. But Theresa later dies of consumption, and a heartbroken Frank decides to save his money and leave for New York City. Although he is saddened to leave his family, he looks forward to his future in the United States.