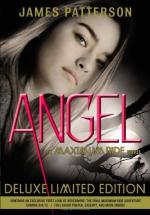 James Patterson
This Study Guide consists of approximately 35 pages of chapter summaries, quotes, character analysis, themes, and more - everything you need to sharpen your knowledge of Angel.

Maximum Ride and her flock must stop the Doomsday Group from exterminating the human race. Max is heartbroken after being left by Fang, the love of her life. She is even more devastated to learn that he has started his own flock and is hanging out with Maya, Max's clone. Max pulls herself together with the help of Dylan, an attractive boy who was created to be Max's perfect mate. Max's flock has taken her to her mother's home in order to help her out of her depression. The flock is visited by Jeb and Dr. Hans, whom they hate, and asked to visit the Generation 77 kids. The kids are a new breed of experiments.

Fang and his gang discover the Doomsday Gang, a group of people who worship the One Light. The group is trying to eradicate the human race. They want all kids to be genetically modified and to lead a new world order. Whereas Max's flock was created in test tubes from a mix of human and avian DNA, Fang's new group has been genetically modified in a lab after birth. Fang has been told to begin a gang in order to save the world.

After Max's sister is almost enhanced by the Doomsday Group, the flock and the gang join forces to fight the Group. They manage to keep the Group from killing tens of thousands of people in Paris, but they still have not discovered the identity of the mastermind, the One Light. Max battles her feelings for Fang and her growing feelings for Dylan. She feels replaced in Fang's life by Maya. Fang feels he must sacrifice their relationship to save the world.

At the end of the book, the gang and the flock go separate ways. Angel is believed dead, but is really being held in a lab.

More summaries and resources for teaching or studying Angel: A Maximum Ride Novel.