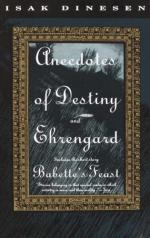 Anecdotes of Destiny ; and, Ehrengard Quotes

Karen Blixen
This Study Guide consists of approximately 45 pages of chapter summaries, quotes, character analysis, themes, and more - everything you need to sharpen your knowledge of Anecdotes of Destiny ; and, Ehrengard.

"Man,in the end, is alarmed by the idea of time, and unbalanced by incessant wanderings between past and future."
The Diver, the Old Cowfish, p. 18

"The idea of French luxury and extravagance next had alarmed and dismayed the Dean's daughters."
Babette's Feast, p. 32

"'Incredible!' he told himself. 'It is Blinis Demidoff!' He looked around at his fellow-diners."
Babette's Feast, General Lowewenhielm, p. 49

"'What will you, Mesdames,' said Babette with great dignity. 'A dinner for twelve at the Cafe Anglais would cost ten thousand francs.'"
Babette's Feast, p. 49

"'We are here to serve Will Shakespeare, the Swan of Avon. And we are not going to think of ourselves at all, for we are nothing at all in ourselves.'"
Tempests, Herr Soerensen, p. 67

"He would also, in exuberant pride and joy, give her a few fatherly taps on her behind and then, more to...

More summaries and resources for teaching or studying Anecdotes of Destiny ; and, Ehrengard.

Anecdotes of Destiny ; and, Ehrengard from BookRags. (c)2021 BookRags, Inc. All rights reserved.