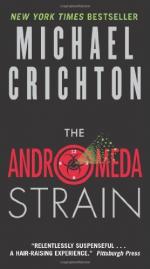 Michael Crichton
This Study Guide consists of approximately 71 pages of chapter summaries, quotes, character analysis, themes, and more - everything you need to sharpen your knowledge of The Andromeda Strain.

This detailed literature summary also contains Related Titles and a Free Quiz on The Andromeda Strain by Michael Crichton.

The Andromeda Strain chronicles five days in the life of an alien life form. Brought back to earth by a secret government satellite, the life form acts like a virus or bacteria, but its structural composition resembles nothing on earth. The alien life form spreads its deadly disease through tiny Piedmont, Arizona, wiping out much of the population in a matter of seconds. When the military men sent to retrieve the satellite are killed as well, Major Manchek from Vandenberg airforce base calls in the Wildfire team.

Project Wildfire is housed in a top-secret, $22 million dollar laboratory buried five stories beneath the Nevada desert. When Wildfire is activated, a team of pre-selected scientists arrive at the laboratory to study the alien life form, which they code-name "Andromeda." The members of the Wildfire team are Dr. Jeremy Stone, Dr. Mark Hall, Dr. Peter Leavitt and Dr. Charles Burton.

Project Wildfire is the brainchild of scientist Jeremy Stone. Dr. Stone is a brilliant, ambitious, Nobel Prize-winning scientist, who employs his political contacts and academic clout to secure government sponsorship of his project. The underground laboratory and project protocols are developed in accordance with his design. Stone obtains top-secret authorization for Wildfire, which extends so far as to allow its team scientists to arrest civilians to maintain project secrecy. The lab is a fortress designed to contain any conceivable kind of alien disease, be it gaseous, viral, bacterial or fungal. Built-in safeguards seal off the lab and prevent the disease from escaping into the environment, even if it manages to escape the well-contained central core of the lab. Unfortunately, in the event the lab becomes contaminated, these safeguards also prevent the escape of the scientists and lab animals inside. The computerized facility is programmed to initiate an automatic nuclear self-destruct device in case of emergency.

Only one man, called "The Odd Man," is entrusted with a key that can turn off the self-destruct sequence. Dr. Mark Hall is given this role, because he is the only single man on the team. According to a government study, single men perform best at decision-making during life or death situations. Thus, Hall is selected as the all-important Odd Man, despite the fact that Jeremy Stone has misgivings about allowing him onto the team. These two men are set up as antagonists; Hall represents the strengths and weaknesses of human nature, while Stone represents the impersonal process of automation.

Once they arrive at the Wildfire Lab, the four scientists must undergo a lengthy decontamination procedure as they descend five underground levels to their working quarters on Level V. Stone has designed the entire lab to be fully automated. The men receive physicals and a series of chemical baths from a computerized system. Once on Level V, they may consume only vitamin pills and a nutrient-fortified, artificial orange drink. Stone's goal is to create a totally pure and sterile environment in the Wildfire Lab. This cold, clinically sterile environment has a negative impact on protagonist Mark Hall. His attempts to flirt with the seductively feminine computer voice fall flat, as do his jokes and his refusal to take project protocols seriously enough to please Dr. Stone. Nevertheless, when they arrive on Level V, all four men plunge into their work with gusto. They are fascinated by this unique opportunity to examine an alien life form, and because the lab is so secure, they believe they have all the time in the world to study it.

The men spend several days testing the Andromeda strain, trying to discover how it kills so quickly, and hoping to find a cure. During the first few days, the scientists seem to have the project well in hand. Their work proceeds smoothly, and Stone's elaborate precautions protect them from the fatal life form. They perform many tests and believe they are close to figuring out its mechanism of action. If they can only learn how it kills, they can figure out how to stop it. Unfortunately, the deadly Andromeda strain finds a way out of its cage. It leaks into the autopsy room, where Dr. Burton becomes trapped. In the ensuing panic, Mark Hall wracks his brain for a way to save Burton. Just as inspiration strikes him, Andromeda leaks out of the autopsy room and floods the laboratory. The nuclear self-destruct sequence is initiated.

Proving The Odd Man Theory that single men work well under pressure, Hall accomplishes three amazing feats in the three minutes before the self-destruct device is set to detonate. First, he figures out a preventive cure for Andromeda. Since the organism kills so quickly, any cure must come in the form of prevention. Before he can implement his cure, Hall notices that four minutes have elapsed, and Burton remains unaffected by the alien life form. Thus, Hall has his second important realization. His cure is unnecessary.

Hall realizes that Andromeda has already mutated into a harmless organism; the cure that the men worked so hard to achieve no longer applies to the ever-changing life form. Andromeda escapes harmlessly into the atmosphere, leaving Hall with his third and final problem. Once initiated, the nuclear device has a three-minute clock, which Hall must race to stop by inserting his key into one of the substations found on every level of the facility. Unfortunately, Hall has been sealed into a room with no substation. He must break into the dangerous central core and evade the computer's attempts to prevent his escape. The automatic sensors shoot him with poisoned darts as he climbs up the core to Level IV. Hall fights off the paralysis caused by the darts just long enough to insert his key into an atomic substation and halt the nuclear detonation.

When Mark Hall comes to, Dr. Stone informs him he has saved the lab and everyone in it with only seconds to spare. This brings to an end the five-day Andromeda crisis. The airborne life form escapes into the atmosphere, eventually working its way back out into space, where it continues to mutate. According to an ominous Epilogue, both the Americans and the Russians have recently been forced to ground their space programs. Officials attribute the reason to a technological systems breakdown.

More summaries and resources for teaching or studying The Andromeda Strain.