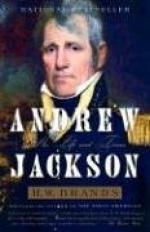 H. W. Brands
This Study Guide consists of approximately 76 pages of chapter summaries, quotes, character analysis, themes, and more - everything you need to sharpen your knowledge of Andrew Jackson.

This detailed literature summary also contains Topics for Discussion on Andrew Jackson: His Life and Times by H. W. Brands.

Andrew Jackson: His Life and Times vividly portrays the hero of the War of 1812 and the seventh president of the United States.

The man who becomes the mythic hero of the War of 1812 and the seventh president of the United States is born in the mountains of South Carolina on Mar. 15, 1767. Jackson is loved by his widowed mother, but materially and intellectually disadvantaged. The Revolutionary War falls during his formative years, imbuing him with a sense of patriotism and hatred of all things British that burns for a lifetime. Orphaned by age fourteen, Jackson apprentices as a lawyer, passes the bar, and in 1788 becomes an itinerant solicitor (prosecutor), working out of Nashville, the primitive capital of the Mero district of the Southwest Territory. Jackson has nothing to show for himself but intelligence and ambition, when he meets the married Rachel Robards. They become romantically involved, claim to marry in Natchez in 1791, before her divorce is finalized, and again, pro forma, in January 1794. They assume the controversy is ended. Jackson makes Rachel the "emotional center of his universe." Every physical separation is painful, but as Jackson's fame grows, these become more frequent and extended.

Jackson influences the constitutional convention in Knoxville in 1796 and is selected as Tennessee's first congressman and soon senator. In 1798, Jackson resigns his seat to which he is not suited temperamentally. He lives by practicing law, speculating, farming, and commerce until he is offered a superior court judgeship. Neither legal training nor his passionate personality qualifies him, but few westerners disapprove of his methods. In 1802, Jackson vies with the popular John Sevier for the coveted position of major general in the Tennessee militia - his true calling. Jackson builds national fame, first as an Indian fighter and preeminently as the defender of New Orleans during the last, crucial battle of the War of 1812. President Monroe, eager to keep him happy and out of politics, names him governor of Florida, where he has battled Spaniards, Britons, and Seminoles, when the territory is finally annexed. Jackson intends to retire to his farm thereafter, but supporters convince him that his duty lies in the White House.

Jackson wins a plurality of the popular and electoral vote in 1840, but loses in the House of Representatives to John Quincy Adams. Immediately, the two and their followers lock horns in a four-year, intensely personal struggle for the 1844 election. This time, Jackson wins by a landslide, but the nasty campaign, which dredges up his every youthful faux pas, takes a toll on Rachel's health, and on the eve of leaving for Washington, she dies suddenly. Jackson thus enters his White House years in delicate health and grieving. He cleans house in the bureaucracy, and raises eyebrows by surrounding himself with a "kitchen cabinet" to support him in Rachel's absence. Jackson believes in "rotation in office" rather than "permanent tenure" of officials as previously practiced, fearing that enjoying power for too long inevitably corrupts. His opponents' term - "spoil system" - is what sticks.

Jackson deals with two major crises during his presidency. First, he faces down the nullifiers in South Carolina, led by his own vice president, insisting that the Union must be preserved even if the federal government must use force against a state; and secondly, opposes the re-chartering of the Bank of the United States, taking aggressive and unpopular actions on constitutional and moral grounds. Before leaving office, Jackson orders the tragic deportation of the Seminole Indians across the Mississippi and recognizes the independence of the Republic of Texas, which he had hoped to annex. Having anointed Martin Van Buren as his successor, Jackson enters an economically challenging retirement, and remains a potent political figure, offering advice to the end. His health declines rapidly, and he dies peacefully at the Hermitage on June 8, 1845.

More summaries and resources for teaching or studying Andrew Jackson: His Life and Times.