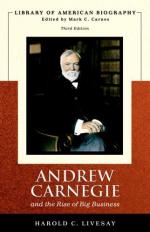 Plot Summary
+Chapters Summary and Analysis
Flying Scots: In Search of a Dream
The Climb Begins
The Apprentice Manager
The Apprentice Financier
The Master Moneyman: A Fortune in Paper
The Master Builder: A Foundation of Iron
The Master Builder: A Structure of Steel
The Master Manager: Costs, Chemistry, and Coke
Triumph and Tragedy
Carnegie Challenges the World
The Climb Ends
Free Quiz
Characters
Objects/Places
Themes
Style
Quotes
Topics for Discussion
Order our Andrew Carnegie and the Rise of Big Business Study Guide

Harold C. Livesay
This Study Guide consists of approximately 40 pages of chapter summaries, quotes, character analysis, themes, and more - everything you need to sharpen your knowledge of Andrew Carnegie and the Rise of Big Business.

Andrew Carnegie and the Rise of Big Business Summary & Study Guide includes comprehensive information and analysis to help you understand the book. This study guide contains the following sections:

This detailed literature summary also contains Topics for Discussion and a Free Quiz on Andrew Carnegie and the Rise of Big Business by Harold C. Livesay.

This biography, published in 2007, covers the years from 1835 through August 11, 1919, when Carnegie dies peacefully in his sleep. The American Dream is a belief that people can rise above humble beginnings by hard work, honesty and thrift to become rich, powerful and influential. Tens of millions immigrate to the New World where their experience embeds the dream into American life much more than the few with unmatched success like Carnegie, Guggenheim and Vanderbilt. This is a true story of the impoverished nineteenth century Carnegie family leaving their homeland in Scotland. Within two years of arrival in America, the Carnegies regain their fortune with the help of their friends, relatives, and countrymen. They earn more income than ever paid in Scotland with young Tom in school, parents Will and Margaret weaving and shoe-binding and Andrew working as a bobbin boy in a textile mill.

Harold C. Livesay writes a biography, "Andrew Carnegie and the Rise of Big Business" after working like Andrew as a poor workman doing odd jobs, then as railroad yardmaster and truck driver delivering steel to construction sites. In early 1960s, Livesay evaluates American steel and other industries he calls "bloated, arrogant and inefficient." Livesay trades in his truck for a Johns Hopkins University doctorate and becomes a professor in 1970. He writes this biography about a man he admires and who is often mischaracterized to place him in context of the times and paradoxical views of life in which Carnegie actually lived. Livesay shares the spiritual riches of this industry giant and philanthropist whose contributions in his name continue today. Carnegie rises from poor bobbin boy at $1.20 per week in 1850 to railroad superintendent at $2,400 per year in 1865. When his first investment pays a dividend for $10, Carnegie sees a whole new world of earning income from capital. At twenty-eight he is the successful manager of a complex, multi-unit railroad business and informal investing group with Thomson and Scott. Thirty years later, J.P. Morgan buys Carnegie Company and all its holdings for $480,000,000. Morgan congratulates Mr. Carnegie on being the richest man in the world.

Carnegie gives 3,000 libraries for $60 million, 4,100 church organs, and forms Carnegie Trust and Hall in Scotland and New York, Institutes in Pittsburgh and Washington, and a School of Technology. He endows the Carnegie Foundation with $125 million and many other philanthropic works before he dies at peace in his sleep on August 11, 1919. His wife Louise dies in 1946 and his daughter Margaret has four children but none are in the steel business. The irony of his many accomplishments and the complexity of his career and business is captured in Carnegie's deceptively simple poem that summarizes the steel business as, "four and one-half pounds of material manufactured into one pound of solid steel and sold for one cent. That's all that need be said about the steel business."

More summaries and resources for teaching or studying Andrew Carnegie and the Rise of Big Business.

Andrew Carnegie and the Rise of Big Business from BookRags. (c)2022 BookRags, Inc. All rights reserved.