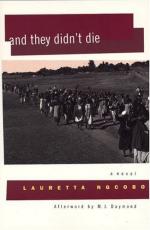 Lauretta Ngcobo
This Study Guide consists of approximately 28 pages of chapter summaries, quotes, character analysis, themes, and more - everything you need to sharpen your knowledge of And They Didn't Die.

And They Didn't Die Summary & Study Guide includes comprehensive information and analysis to help you understand the book. This study guide contains the following sections:

This detailed literature summary also contains Topics for Discussion and a Free Quiz on And They Didn't Die by Lauretta Ngcobo.

And They Didn't Die is a novel of the apartheid in South Africa by formerly exiled South African writer Lauretta Ngcobo. The novel follows the life of Jezile, a young wife in the small village of Sigageni. Jezile's husband is forced to work in the larger city of Durban, making it nearly impossible for Jezile to conceive the child that would complete her role as wife. Jezile takes the situation in her own hands, setting a precedence for her behavior that will take her from a rural wife and mother to an incarcerated protestor to a murderess. And They Didn't Die is a comprehensive view of the woman's role in the apartheid and resulting turmoil that defined the life of Africans in South Africa for more than thirty years.

Jezile has only been married for a year, but she has not seen her husband in the majority of that time because he is forced to work in Durban to provide for his family. When her husband, Siyalo, comes home for a brief visit each year, Jezile has high hopes that she will be able to conceive, fulfilling her role in the Majola family. However, each time Siyalo comes home, it is the wrong moment in Jezile's cycle to achieve pregnancy. Finally, after three years of trying and failing, Jezile takes things into her own hands in order to protect her marriage. Jezile visits a doctor and then goes to the offices of BAD, Bantu Affairs Department, to seek permission to visit her husband in Durban. Jezile is granted permission, but only under the condition that she will take a pass. Jezile and the women of her village have chosen not to take the passes in protest of the governments control over the people. However, Jezile is desperate and she makes the choice to put her future family first.

Jezile spends a happy few weeks with her husband. During this time, Jezile sees the horrible conditions the white government forces the African work force to live in. Also during this time, Jezile witnesses and even takes small part in the protests taking place in the city. Toward the end of her visit, Siyalo insists that Jezile return to their village early but refuses to tell her why. When Jezile returns, she is filled with embarrassment for having taken a pass. Jezile admits her actions to Nosizwe, a female doctor and the leader of the women's prayer group. Nosizwe is angry with Jezile, but allows Jezile to talk to the group about the protests she saw. Jezile feels humiliated, but is later allowed to repair her betrayal by burning her pass with many others during a protest.

Months after giving birth to her first child, Jezile comes home one night to find her husband has returned early from Durban. It turns out that Siyalo has been active in protests in the city, but his employer learned of this and fired him. After being unable to find another job, Siyalo has been refused the right to work in Durban ever again. The following day, Jezile goes to a protest in Ixopo against he passes for women. This results in arrest and a six month prison sentence. Jezile's child, S'naye, is left with her father and grandmother. Unfortunately, there is no milk to feed the baby. When Jezile is released from prison, five months pregnant, she discovers that her daughter has nearly starved to death. Jezile falls into a dark depression, causing a rift between herself and her husband as well as her mother-in-law.

Siyalo, in a desperate move to save his daughter, begins stealing milk from a local white farmer's cows. For weeks this scheme works, and S'naye regains her health. However, Siyalo is spotted by one of the African workers and is arrested. Siyalo is sentenced to ten years in prison, leaving Jezile desperate to provide for her two young daughters. When a road crew comes into the area to repair the roads, Jezile gets work making them beer and washing the white foreman's clothing. When the crew must move on, the white foreman asks Jezile to work in his home. Jezile goes, even though it means leaving her children behind for an unforeseen amount of time. Jezile is unhappy in the work, but it pays well. One night, a few months after her arrival in the white household, Jezile is raped by her white boss. Unable to face the idea of going home again, Jezile stays. Jezile ignores her pregnancy until she goes into labor. The child is born with white features, catching the attention of the local police because his conception and birth are illegal in South Africa. Jezile's boss puts her on a train and sends her home only a few days after the child's birth.

Jezile's situation causes great embarrassment for the Majola family, even leading to her mother-in-law's ex-communication from the church. Jezile returns to her mother's village where she is happily received. However, when Siyalo gets out of jail seven years later, his people come and take his children from Jezile as is the tradition of their people. The girls grow up and the youngest becomes active in the apartheid protests. One night both girls come to visit Jezile. When Jezile returns from helping the youngest find a secret path out of the village, she finds a soldier raping her oldest daughter, S'naye. Jezile kills the soldier, then goes to Siyalo to tell him before he can get the wrong story from someone else.

More summaries and resources for teaching or studying And They Didn't Die.

And They Didn't Die from BookRags. (c)2022 BookRags, Inc. All rights reserved.