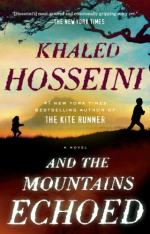 Khaled Hosseini
This Study Guide consists of approximately 57 pages of chapter summaries, quotes, character analysis, themes, and more - everything you need to sharpen your knowledge of And the Mountains Echoed.

And the Mountains Echoed Summary & Study Guide includes comprehensive information and analysis to help you understand the book. This study guide contains the following sections:

This detailed literature summary also contains Quotes and a Free Quiz on And the Mountains Echoed by Khaled Hosseini.

Abdullah and his sister, Pari, are traveling to the neighboring town of Kabul with their father, Saboor. He tells them the story of a monster who demands that a family give up one of their children. If the family refuses, the monster will take all the children. The father draws names to decide which child will be sacrificed and the monster takes that child. The father, driven by grief, goes to the monster's lair to fight the beast. There, he discovers the child is happy and healthy but he has to decide whether to retrieve the child, pulling him back into a life of hardship, or leave him to live his happy life apart from his family. The father chooses to leave the child, believing that's the best thing for the child though the father is heartbroken.

The family arrives in Kabul and the reader learns the purpose behind Saboor's story. Saboor is unable to buy the necessities for his family and one child has already died because of the brutal winter without adequate heat in the house. Saboor has agreed to sell Pari to Nila and Suleiman Wahdati, a wealthy couple who are unable to have children of their own. The adoption is coordinated by the brother of Pari's stepmother. His name is Nabi and he works for the Wahdatis. Abdullah and Pari are very close and they are heartbroken at the separation.

Pari eventually comes to believe the Wahdatis are her biological parents. When Suleiman has a devastating stroke, Pari and Nila move to Paris and Pari is told her father has died. Actually, he lives for many years and Nabi cares for him. When Suleiman dies, Nabi inherits the house and property from Suleiman but the wealth is more than he needs. He lends the house to several people who volunteer in various capacities, helping the people of Kabul. One of them is a surgeon named Markos.

Markos is from Greece and he grew up with his mother, a school teacher who felt strongly that people should be treated fairly. When his mother's friend shows up with her daughter, Markos is excited to meet her. Then he discovers that the daughter, Thalia, has been brutally deformed by a dog attack. A large section of her lower face is literally missing. They are uneasy with each other at first but come to be best friends. Talian encourages his love of photography and Markos eventually becomes a surgeon.

Markos works in a hospital where a young girl named Roshi is in need of plastic surgeries. Two young men who grew up in the neighborhood return to Kabul in an effort to reclaim their family's property. They are cousins named Timur and Idris. Idris, caught up in the moment, promises to help get the girl's surgeries but fails to follow up. Timur eventually steps in and helps. He has loaned money and provided support for many people, including lending Abdullah the money to open a restaurant in the United States. He marries a woman named Sultana and they have one daughter, named Pari in memory of Abdullah's lost sister.

Back in Abdullah's home town of Shadbagh, a war lord has taken over control. He has built schools and helped the town grow and prosper, but he is brutal. Abdullah's half-brother, Iqbal, returns to Shadbagh to reclaim his family's home only to find the war lord has built a gaudy mansion on the property. Iqbal's son, Gholam, meets the war lord's son, Adel. The two seem on the way to forging a friendship until Gholam announces the true reason his family is in the area. Adel doesn't initially believe it but realizes Gholam is telling the truth after Iqbal makes a public demand for justice. Adel's father apparently kills Iqbal and the rest of the family leaves.

As Nabi nears the end of his life, he writes a letter to Markos, who is living in Nabi's house. Nabi tells Markos about Pari's adoption and asks that he find her after Nabi's death. Markos does track Pari down and she learns the truth about her biological family. By then, Sultana has died and Abdullah's mind has withered to the point that he doesn't remember her. Pari makes the trip to America anyway and reconnects with her niece, also named Pari. As the book comes to a close, Abdullah's daughter and sister meet in Paris where the young Pari prepares to meet her cousins for the first time.

More summaries and resources for teaching or studying And the Mountains Echoed.

And the Mountains Echoed from BookRags. (c)2022 BookRags, Inc. All rights reserved.