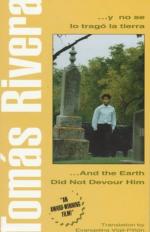 And the Earth Did Not Devour Him Summary & Study Guide

Tomás Rivera
This Study Guide consists of approximately 39 pages of chapter summaries, quotes, character analysis, themes, and more - everything you need to sharpen your knowledge of And the Earth Did Not Devour Him.

And the Earth Did Not Devour Him Summary & Study Guide Description

And the Earth Did Not Devour Him Summary & Study Guide includes comprehensive information and analysis to help you understand the book. This study guide contains the following sections:

This detailed literature summary also contains Quotes and a Free Quiz on And the Earth Did Not Devour Him by Tomás Rivera.

“And the Earth Did Not Devour Him” is the story of a young boy who lives the life of a migrant farm worker with his family. The novel spans one year. The life is difficult on individuals and families, and death is a common fear. The land owners are often greedy and demanding as is seen in one of the very early chapters when a farm owner refuses to allow the workers additional breaks for water even when the temperatures are soaring and the children are among the workers. Several people slip away to a water tank on the pretense of needing to urinate. The farmer sees this and plans to scare them into stopping the practice by shooting in that direction. He shoots a little boy standing by the tank and the child’s body falls into the water. The farmer is found not guilty of murder but guilt ruins his life and he eventually loses everything.

Another scene from the book includes a visit to a fortune teller in which a mother is assured that her son, who has been reported missing in action in Korea, is safe and will return home. In another scene, a mother prays a fervent prayer for her son’s safe return, pleading that God will spare his life even if it means giving up her own life. In yet another scene, a family spends some of their hard-earned money on a photographic memento only to discover that the deal was a scam. In another scene,

Poverty and hardships are seen throughout the book. The families are often traveling and living in primitive conditions. Often, the situations are unsanitary, such as the scene in which a woman throws a dirty diaper from a moving vehicle. The characters are largely uneducated and are sometimes skeptical of things they don’t understand. An example of this is seen in a brief conversation between two people. Both are apparently men, and they discuss an offer of jobs in Utah. They have never been there, and one of them is certain that the state is near Japan.

The people are largely at the mercy of circumstances, poverty, and prejudice. The young boy who narrates much of the story is caught up in a fight at school because others make fun of his ethnicity. He is stereotyped as a thief and when he stands up for himself in the only way he knows how - with violence - he is punished. He hates to disappoint his parents but he also hates school. Since he is forced to attend school and his parents are forced to move often to follow the migrant farm circuit, he has no opportunity to settle in and actually gain from the experience.

More summaries and resources for teaching or studying And the Earth Did Not Devour Him.

And the Earth Did Not Devour Him from BookRags. (c)2022 BookRags, Inc. All rights reserved.