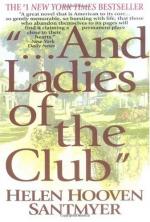 --and Ladies of the Club Summary & Study Guide

Helen Hooven Santmyer
This Study Guide consists of approximately 41 pages of chapter summaries, quotes, character analysis, themes, and more - everything you need to sharpen your knowledge of --and Ladies of the Club.

--and Ladies of the Club Summary & Study Guide Description

--and Ladies of the Club Summary & Study Guide includes comprehensive information and analysis to help you understand the book. This study guide contains the following sections:

This detailed literature summary also contains Topics for Discussion and a Free Quiz on --and Ladies of the Club by Helen Hooven Santmyer.

Anne Alexander and Sally Cochran are newly graduated from the Waynesboro Female College when they are told that some women, including some of their former teachers, are planning to organize the Waynesboro Women's Club. Anne's initial reaction is to turn down the invitation to join, but Sally agrees and Anne follows suit. The two girls are among the youngest of the first twelve members. The club's purpose is to provide mental stimulus for the members while providing social activities. Sally and Anne are soon caught up in the events typical for young women of their age. Both marry, Sally to a young businessman named Ludwig Rausch and Anne to a young doctor named John Gordon. Ludwig begins a rope factory and John goes into practice with Anne's father. Both women have children, Anne giving birth to a son they name Johnny and later to a daughter named Belinda and called Binny for short. Binny, as a teenager, contracts rheumatic fever and dies of complications from the disease. Johnny goes to medical school and returns to Waynesboro to go into practice with his father, Anne's father having died by that time. John and Ludwig both die in the coming years.

The club continues to be an important role in the lives of all the members, including Anne and Sally. Among those is a pair of elderly sisters named Caroline and Lavinia Gardiner who don't really want to belong to the club but join in the hopes of furthering the career of their nephew, Doug. There are also sisters Thomasina and Eliza who join with their mother and remain members after the death of their mother and until their own deaths.

Johnny has spent time with Sally's daughter Elsa, who is deeply in love with Johnny, but Johnny marries Julia Deming, the daughter of another club member. Johnny and Julia have a son, Alexander Tucker, but Julia swears she won't have another. She and Johnny soon have separate bedrooms and when Julia discovers that Johnny has had an affair, she files for divorce. She moves with Tucker and her mother to California, allowing Tucker to return to Waynesboro a couple of the following summers. Tucker becomes certain that he'll go into medicine, though his mother objects. Johnny dies of heart problems and several years pass before Tucker does return. He eventually marries Sally's granddaughter, Jennifer and they have three children. Anne and Sally continue to be a part of the club and continue to be friends until Sally's death, followed soon by Anne's, the final two of the founders of the club.

More summaries and resources for teaching or studying --and Ladies of the Club.

--and Ladies of the Club from BookRags. (c)2022 BookRags, Inc. All rights reserved.