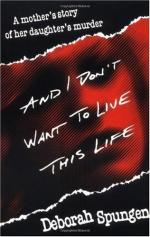 And I Don't Want to Live This Life Summary & Study Guide

Deborah Spungen
This Study Guide consists of approximately 35 pages of chapter summaries, quotes, character analysis, themes, and more - everything you need to sharpen your knowledge of And I Don't Want to Live This Life.

And I Don't Want to Live This Life Summary & Study Guide includes comprehensive information and analysis to help you understand the book. This study guide contains the following sections:

This detailed literature summary also contains Topics for Discussion and a Free Quiz on And I Don't Want to Live This Life by Deborah Spungen.

Deborah Spungen became pregnant with her first child, Nancy, at a time when a pregnancy was the last thing on her mind. Deborah was finishing her final year of college and her new husband was in the military, stationed clear across the country from their home in Pennsylvania. Deborah found herself struggling with a pregnancy she did not understand, unable to turn to her disappointed mother or her overworked obstetrician. Deborah's husband returned just in time for Deborah to go into labor five weeks early with Nancy. Deborah was anesthetized and had no idea what had taken place during this dramatic delivery until hours later when the doctor informed her that her daughter was born cyanotic, lacking oxygen, and that she was extremely jaundiced. The first time Deborah saw her daughter was through the nursery glass, moments before the infant was to be taken to the operating room for a blood transfusion.

Little Nancy survived her early ordeal and was allowed to go home. However, Deborah soon discovered that Nancy was a difficult infant. Nancy cried twenty-four hours a day, only calming in her sleep, sleep that would rarely last for more than an hour or so at a time. Deborah and her husband Frank found themselves walking around on egg shells when Nancy was resting, afraid that even the flip of a light switch might wake her. When Deborah turned to her pediatrician for help, he accused her of being inexperienced and then prescribed Phenobarbital to calm the baby long enough to allow her parents to sleep. Despite Nancy's constant crying, she grew and developed at an amazing rate. Nancy crawled early and would constantly be on the move. Nancy learned to talk early as well, often having verbal tantrums, threatening to destroy her mother's belongings at the young age of two.

Deborah and Frank moved into a new house when Nancy was still a toddler, a move that deeply traumatized Nancy. Soon after, their second child, Susan, was born. Nancy resented Susan and would often go out of her way to torture the little girl. Within a few years, Deborah and Frank welcomed a son into their home as well. This time Nancy took to the new infant with excitement, more than happy to help out with his care. However, when Nancy began school, her difficult behavior returned. Nancy would have trouble making friends and would sometimes come home from school convinced that everyone at the school was out to get her.

Deborah and Frank decided to take Nancy to a psychiatrist and have her evaluated. After months of testing, the clinic they turned to decided that nothing was wrong with Nancy that a few behavior modifications could not fix. However, despite their attempts to do as the doctors asked, Nancy's behaviors grew worse. Another psychiatric clinic evaluated Nancy and placed the blame for her behaviors on the parents. Nancy began therapy with a doctor, but whenever Deborah would reach out to this doctor for help with Nancy's behavior, it would be assumed that Deborah was overreacting or exaggerating Nancy's behaviors. Even a bad reaction to a sedative did nothing to convince the doctor. Finally, however, when Nancy attacked the doctor and destroyed her office the doctor began to believe Deborah's claims. Unfortunately, despite having come to the conclusion that Nancy was schizophrenic, the director of the hospital told Deborah and Frank they were no longer equipped to deal with Nancy. This director failed to tell the Spungens about his belief that Nancy was schizophrenic or to recommend further testing.

At this point Nancy had been thrown out of public school and Deborah was left to find a private situation for her. After months of searching, Deborah found Darlington, a private school system designed to help children with emotional and behavioral problems. Nancy was interviewed by the school and they agreed to accept her into their program in Connecticut. Deborah and Frank took their daughter to the school and left her in the care of the directors there, hoping that this one last chance would be the one to save their daughter. Nancy was only eleven.

Nancy did well at the school. However, when she returned the following year and a new director was in charge, Nancy's behavior once again escalated. Soon the school decided they could no longer handle Nancy and they transferred her to another of the Darlington schools in Pennsylvania. It was at this second school, the Avon Unit, that Nancy was introduced to illegal drugs. Nancy would come home on school breaks and smoke cigarettes in the kitchen and marijuana in the bedroom. Despite discussions with their parents against illegal drugs, Deborah and Frank soon discovered that their other two children were also smoking marijuana. This caused Deborah and Frank to be placed in a difficult position when the Darlington system decided the best way to get rid of Nancy was to graduate her at sixteen. Unable to have Nancy around their younger children, Deborah and Frank agreed to allow Nancy to go to college in Colorado where she had already been accepted at the University of Colorado.

After only a few months, Frank received a call from the Denver police alerting him that Nancy had been arrested in a case involving stolen skis. The only way Nancy could avoid being charged with theft was to agree to leave Colorado immediately. Nancy returned to Pennsylvania and her parents' home. Nancy was to get a job and work toward independence, but like school, Nancy had trouble getting along with others, causing her to lose the one job she managed to get. Nancy began sleeping all day and partying all night. In time the Spungens knew they had to move Nancy out of their home. Deborah arranged for Nancy to take an apartment in New York City, not far from the Chelsea Hotel.

Nancy did well in New York at first. However, Nancy's growing dependency on illegal drugs soon took over and she found herself unable to care for herself or to make the money she needed to survive. Nancy eventually got into a methadone program and kicked the heroin addiction. Soon after that, Nancy moved to London to be a part of the music scene that was growing there. It was in London that Nancy met Sid Vicious, bass player for the Sex Pistols. When the Sex Pistols broke up, Nancy and Sid moved back to New York to attempt to launch Sid's solo career. Nancy had begun using heroin again in London and Deborah was in the middle of attempting to get her and Sid into a methadone program when she got the word that Nancy had been murdered.

The Spungens suddenly became front page news, with reporters camping on their front lawn. Frank and Deborah could not leave their cars to enter their home without being hounded by dozens of reporters, both from the United States and London. To make matters worse, the Spungens were treated with a great deal of disrespect when they dealt with the coroner and the district attorney dealing with their daughter's murder. It soon got to the point that Deborah was afraid to go home alone. After Sid Vicious' death a few months later, Deborah decided to sell the house and make a new start of it. This caused some turmoil for the rest of the family who felt that Deborah was attempted to pretend Nancy never existed. The family would have to enter counseling in order to see the impact Nancy had on their lives and was still having. It took time, but eventually the Spungens were able to put their lives back together and move on.

And I Don't Want to Live This Life from BookRags. (c)2022 BookRags, Inc. All rights reserved.