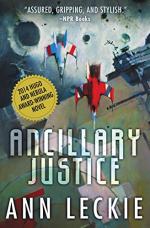 Ann Leckie
This Study Guide consists of approximately 47 pages of chapter summaries, quotes, character analysis, themes, and more - everything you need to sharpen your knowledge of Ancillary Justice.

Ancillary Justice is a science fiction novel, and the first part of the Imperial Radch Trilogy by Ann Leckie. In this novel, a former ancillary who calls herself Breq is determined to assassinate the Lord Anaander Mianaai of the Radch Empire in revenge for killing her commander, Captain Awn, some 20 years before. When the novel opens, Breq has come to the wintry planet of Nilt. There, she stumbles across a former ship officer named Seivarden Vendaai with whom she had briefly worked. Vendaai has been brutally beaten up, so Breq administers medical treatment and provides shelter. Breq has a difficult time understanding why, because until 20 years ago, she had served the starship Justice of Toren as both part of its Artificial Intelligence system and an ancillary (a human with surgical implants to create a mindless slave soldier), where she had no free will to do such things. Breq has quickly become a believer in human free will, even if she cannot understand why she does the things she does, sometimes.

Breq learns that Vendaai has been frozen for 1,000 years, and on coming out of sleep, discovers how dramatically the Radchaai Empire has changed. For example, Vendaai’s own noble family now no longer exists, while the Radchaai have entered into an embarrassing non-aggression treaty with the alien Presger Empire. Vendaai, reeling from the changes she experienced during the glory days of the Empire, has turned to drink and drugs. With Vendaai in tow, Breq seeks out a doctor and collector of ancient artifacts named Strigan, whom she believes to possess a rare gun not accounted for by the Radchaai. Breq explains to Strigan and to Vendaai that she wishes to assassinate the Lord of the Radch.

It is revealed that Breq, once both ancillary and AI system for the starship troop carrier Justice of Toren, was present during the last annexation and expansion of the Empire, of the planet Shis’urna. Breq, then known as the ancillary One Esk Nineteen, served as adjutant to Lieutenant Awn, who was tasked with keeping the postwar peace in the town of Ors. There, Awn and One Esk Nineteen uncovered a plot by the Lord Radch, who, like One Eask Nineteen, was split into numerous ancillaries to ensure a presence in all times and all places while avoiding assassination of her one true self. Some of the Lord’s ancillaries had taken on a reformist streak, which was unacceptable to the real Lord Radch.

Hoping to root out the traitor ancillaries, the Lord attempted to stage a bout of violence to determine how the other Lord ancillaries would respond. Awn and One Esk Nineteen uncovered the plot, which the Lord realized presented a problem. The Lord then accused Awn of reformism, and ordered One Esk Nineteen to kill Awn, then destroyed the Justice of Toren to ensure all data the ship had collected on the plot was destroyed. One Esk Nineteen was cut free by the Lord to continue to serve her in the long run. It was then that One Esk Nineteen, in command of most of her faculties, decided on revenge.

Back in the present, Strigan sells Breq the gun she has requested. Vendaai decides to accompany Breq on her quest, for Vendaai is inspired by Breq’s commitment to doing right. The two travel to Omaugh Station Palace where they are granted an audience with the Lord, and sped through security by an old friend of Awn’s, Skaaiat Awer. The Lord appears before them in the form of two ancillaries. By singing a song known only to Breq, one Lord is able to distinguish herself from the other, leading to Breq’s decision to shoot the other.

The Lord then confirms she is at war with herself, and decides to destroy the entire Station to prevent word of the civil war of her self from leaking out. Breq refuses to allow this to happen, and a massive fight breaks out between forces allied with several different ancillary versions of the Lord that all happen to be present at the Station. Breq is successful in her efforts to stop the Station from being destroyed, but now knows an all-out civil war has erupted. The real Lord of the Radch appoints Breq captain of the ship Mercy of Kalr, and names Breq as her moral advisor. Breq has no choice but to accept things as they are for the time being.

More summaries and resources for teaching or studying Ancillary Justice.