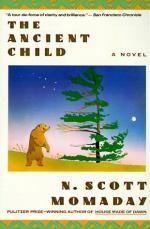 N. Scott Momaday
This Study Guide consists of approximately 48 pages of chapter summaries, quotes, character analysis, themes, and more - everything you need to sharpen your knowledge of The Ancient Child.

The Ancient Child is a masterful reworking of a traditional Kiowa tale about a boy’s metamorphosis into a bear. Transposed by N. Scott Momaday into modern times, the tale becomes that of a tortured artist—Locke Setman—caught between the Kiowa world of his heritage and the urban, sophisticated world he inhabits as an internationally-renown artist living in San Francisco, where he was raised by his adoptive father, Bent. Because Locke was orphaned at the age of 7, his earliest memories are not of his tribal home, but of a Catholic orphanage where he lived until being adopted by a world-weary and creative philosopher and professor. Locke first comes into contact with the Kiowa world as an adult, when he is summoned to the reservation by means of a cryptic telegram following the death of his grandmother. On the reservation he meets Grey, a beautiful native and aspiring medicine woman who will ultimately be the agent of Locke’s own transformation from tortured artist to a self-possessed being whose identity remains enigmatic in the book’s final passage.

More summaries and resources for teaching or studying The Ancient Child.